Darkseid wars brings forth one of the most dangerous and enthralling fights in the history of new 52 series. The story revolves around the king of Apokolips Darkseid who is said to be the most powerful villains Superman has ever faced. The story starts with Justice League (Volume 2) #40 and is ongoing. You will also get to see Anti-Monitor and Darkseid take on each other in a mortal combat. 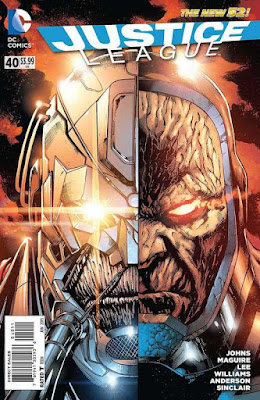 Darkseid takes control of Apokolips while Highfather takes New Genesis. A huge war broke out as the two planets came in orbit of each other triggering a huge showdown, which threatened to end New Gods! Metron however secured peace in time with Darkseid adopting Scott and Highfather taking Orion. But it didn’t work as Scott was thrown into slave pits where he was forgotten. Years past, he learnt to pick up lock and set himself free. Slowly but surely, he learnt his way around Apokolips, until eventually he was able to break away completely and come to Earth, where he took the name Scott Free. He now goes by the superhero name “Mr. Miracle”. Scott breaks into Darkseid’s walls to steal Mother Box because rumours have been around that Darkseid is preparing for war. In order to stop him, Scott needs help of warning group – the one group that has been able to stop him – Justice League.

Justice League have been experiencing a few changes recently – from Amazo virus. They still have Superman, Batman, Flash, Flash, Green Lantern, Cyborg and Wonder Woman with a few additions. Power ring uses his Evil Green Lantern from Earth 3. Lex Luthor and Captain Cold have both been invited into Justice League. Colonel Trevor and Shazam are also part of team now. They are together investigating an odd string of murders, and killers have all vanished. Superman and Lex go into latter’s bunker to check status of Neutron after the events of Amazo virus. Cancer has slowly been killing him and Luther doesn’t think he can do anything to save him. But Superman challenges him to do it.

Back in Apokolips, Mr. Miracle is looking for a woman who’s also being searched by Darkseid’s soldiers – Mareena Black. Darkseid himself appears staring at Scott. He fires his eye beams at him destroying the ground that Scott was standing on, knocking him over. Darkseid goes upto Scott and places his boot over his entire body. Scott struggles to reach out for Mother Box for which he had come for. But it explodes BOOOM… He’s gone!

While Flash is talking to Power ring, he suddenly stops as someone is climbing out of his mouth booming onto the earth through his body. She declares, “First Blood!” Everyone can see her draped in Darkseid’s symbols and colour. She then attacks Batman in the neck, taking him down. Cyborg fires a beam at her as she sees technology of Mother Box inside him and demands it and breaks his Armor to pieces. Shazam helps cyborg recover, before attacked in stomach. But before she could finish off Shazam, Wonder Woman binds her from behind using lazzo and demands who’s she. But she manages to get free, so Wonder Woman informs Superman that the league is under attack. But the woman overhears her and tells her – “It is no secret. I am an Amazon and I am completing the mission I was created for.” She hits Wonder Woman with full power of eyebeams, breaking her braces, shattering them and bringing her to the ground.

Back in the bunker, Lex Luthor brings Superman into his armoury where he has a new power suit, entirely powered by Kryptonite, can be used if Wonder Woman is in trouble. But Superman takes it as a new evil plan from Lex and tells him “between this and Amazo virus, the League is done with you, Lex!!”. Lex is enraged and hits him with a blast of power from his suit, telling him “Who are you to decide??” and then someone shoots Lex and he falls into Superman’s arms, as Superman the shooter is Lina, Lex’s sister. “Don’t be surprised Superman, everyone hates him!”

Back at the battle scene, Green Lantern flies in to take up with mystery woman, only to have her send his energy back at him and a pulse dropping him. She then jumps in grabbing Powerring, exclaiming that she’s the main target, because her evil powers are linked to other universe. She draws out the power out of the ring tapping into other universe, breaking the sky above everyone and calling to the darkness – Anti Monitor arrives on Earth!!

Lina takes the Mother Box out of Lex and sucks everyone into it, all goto Apokolips, just as Scott Free’s Mother Box drops him in front of Mareena Black, the woman everyone is searching for. Wonder Woman continues her battle against mystery woman, and the Anti Monitor slams to stops the war. Wonder Woman exclaims “What are you”. “I am Desperate” came the terse reply. At that moment, Metron uses his Boom Tube to teleport everyone away from Anti Monitor and mystery woman. The mystery woman informs that Darkseid is already on his way to take on Anti Monitor.

Mareena Black brings Mr. Miracle into her base of operations and explains that she’s completing the mission of Amazons, the one that they forgot and she wants his help. She tells him that Darkseid is going to enslave the whole Multiverse so she created a weapon by having his daughter Grail. She then sent Grail across the Multiverse to find one being capable of defeating Darkseid, and she found him – the Anti Monitor and she brought him to earth. Hearing all this, Mr. Miracle is shocked, “You started this war… here billions will die”. “War is not free, there’s always a cost”.

Everyone asks Metron what’s going on but he explains he’s only there to observe. He has seen Justice League save the world multiple times but then this is not the time for them to save it. It’s time for them to say goodbye to their loved ones. Wonder Woman throws lasso around him and demands to know who is Anti Monitor. Hal tells her – it won’t work; he doesn’t have the knowledge… it’s in the chair. Wonder Woman persists – the how do I get my answers; Take his Chair was the solution. She takes him of the chair, the chair begins teleport itself away, Batman runs over and sits over it! All the power and knowledge of universe shoots through Batman connecting him to the chair. He has answers to all questions.

Back at Apokolips, Superman and Lex try to figure out why they are there because Superman’s X-Ray vision does not seem to be working. All the slaves suddenly start to attack both chanting “death is freedom… death to Superman!” Lex manages to blast them al away from Superman. Lex looks off in horror as Superman is bleeding as his powers are fast depleting. Batman the new God of knowledge I sitting with Justice League as Mr. Miracle boom tubes in and grabs Wonder Woman’s lazzo and lets them know that he is their friend and can help them with a plan for Anti Monitor to leave Earth, just need all to come with him. But Batman refuses and tells that he’s going into depths of Multiverse to find who the Anti Monitor is. Mr. Miracle chains Metron to a post and everyone heads off to their missions.

Superman and Lex get stuck in Apokolips while they find themselves boxed in and Superman unable to fly. Lex holds his hand out to Superman and asks him to trust him. They fly using Lex’s suit but the para demons can also fly, he flies over a pit of solar energy and drops Superman. Instead of Superman granted his powers again, but he falls through burning his own skin. Lex realises that something is wrong. Superman rises out, all blacked out, shouting at Lex, “I should have killed you a long time ago Lex!!”. He’s now the God of strength!

Back on earth, Justice League appear before Grail just at same time Darkseid boom tubes. Powerring and Wonderwoman get perplexed whom to fight first and who’s the lesser evil among the two! Anti Monitor and Darkseid are slugging it out while Hal and Batman are searching for origins of Anti Monitor deep in Multiverse, which brings them to Earth 3, the home of evil Justice League. Wonderwoman continues her fight with Grail.

In Apokolips, Superman kills all para demons in swoop and asks a scared Lex, “did you honestly think that you ever stood a chance against me? You only stood a chance because I held back” and punches Lex. Meanwhile, Darkseid and Anti Monitor fight each other and latter summons black racer death itself to battlefield.

Batman and Green Lantern make way to planet court and get to know, birthplace of Anti Monitor. They realise that he came to earth to seek the forbidden and became cursed because of it. Mobius is involved in this and invented the chair that Batman is sitting on, the first man to seek creation of knowledge of universe. Batman realises that Darkseid doesn’t know truth about anti-life equation, the thing that he has been seeking since inception. Mobius touched the anti-life equation and became Anti Monitor!

Anti Monitor turns black racer into Flash and turns him onto Darkseid. He screams, “The anti-life equation is in my veins”. And using his power and speed of Flash, Anti Monitor kills Darkseid. As Darkseid hits the ground, God of Laughter Gelos laughed!