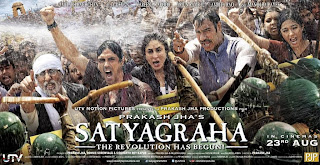 The new movie Satyagraha which has been released this weekend is as we had expected a low promotion and a bad script. The movie Satyagraha stars big actors like Amitabh Bachchan, Ajay Devgan, Kareena Kapoor, Arjun Rampal, Manoj Bajpai and Amrita Rao. But as suspected the movie fails to capture the hearts of the viewers. The movie is based on Anna Hazare’s recent movement to bring Lokpal bill. You might be aware of the news that Prakash Jha the director of the movie had earlier refused to show the movie to team Anna. I don’t think they wish to see it now either.

The plot of the movie revolves around a retired teacher named Dwarka Anand whose role is played by Amitabh Bachchan. Dwarka Anand is a man of ideals and intends to fight for nation. His engineer son Akhilesh has a friend named Manav played by Ajay Devgan is ambitious capitalist. Akhilesh dies in an accident and compensation is announced to his family by minister Balram Singh role played by Manoj Bajpai, but unfortunately Akhilesh’s wife does not receive the compensation despite all her efforts. After this Dwarka Anand tries all his efforts to get the compensation from the Government authorities but fails. Being a middle class man and relying heavily on his sole son his family is down.
This causes Dwarka to lose his temper and one day he slaps and arrogant government official and gets imprisoned. Manav starts an online and offline campaign to free him. Adding then to the story arrive Arjun Singh(Arjun Rampal) a bahubali politician and a young journalist Yasmin (Kareena). Together they sit on hunger strike and protest against the policies of the government. There is a special appearance of Prakash Jha as well. The movie is not doing very well as predicted and has been poorly rated by most of the sites.
Though the movie has some of the big names the story is quite predictable and no justice has been done with the script either. The actors have not been used to their full potential and the movie does not seem to gather the viewer’s attention.
Though some of the actors like Manoj Bajpayee, Ajay Devgn, and Amitabh Bachchan have ones again show why they are on top of their game.
The movie could have done better if it had some better songs. The only track which is gaining some popularity is Raghupati Raghav Raja Ram, which is a remix of the popular prayer. Though the directory has picked up the right topic but has failed to gather the audience a overall 5 out of 10 rating should be given to this movie.