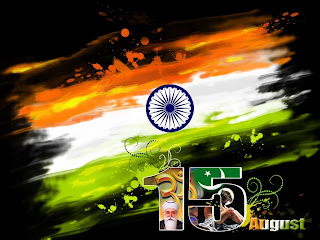 15th August is the auspicious day on which India got its independence from the British rule in the year 1947. Many believe that it was Nehru and Gandhi who led India to the independence one should not forget that India was a rich source of money and man power to the Britishers how could they leave such a country that too with the non violence movements carried out by many of their followers.

Do you think if colonies like USA, and China had followed non violence movement they would have ever got freedom from the Britishers. Some of the big points we still ignore are the sacrifices of our brave martyrs like Bhagat Singh, Neta Ji and other legends.

Apart from them it was the economic and political condition which led the Britishers to move back from India.
Here is what Sir Stafford Cripps said in a debate on the motion to grant Indian Independence in the British House of Commons in 1947 (‘The Freedom Struggle and the Dravidian Movement’ by P.Ramamurti, Orient Longman, 1987)

…The Indian Army in India is not obeying the British officers. We have recruited our workers for the war; they have been demobilised after the war. They are required to repair the factories damaged by Hitler’s bombers. Moreover, they want to join their kith and kin after five and a half years of separation. Their kith and kin also want to join them. In these conditions if we have to rule India for a long time, we have to keep a permanent British army for a long time in a vast country of four hundred millions. We have no such army….”

Coming back to the present day, it has been 66 years since our independence. On this day the prime minister of India hoists the national flag on the Red Fort and delivers his speech followed by a parade. Over the years we have developed our self to become the one of the leading countries in the world. But there are also some aspects and areas where we need to rise, corruption is one such issue. We cannot forget how Anna Hazare and his movement brought together and motivated the youth against widespread corruption in the country. Hopefully with new rules and regulations it will decrease with time.
Some other issues which the nation faces even after so many years of independence is poverty some of which is caused to due excessive population while other because of lack of resources either way both and entangled to one another. We need to follow countries like China where one child policy exists.