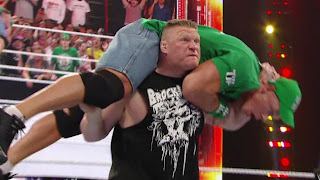 The entire WWE universe came to life when the youngest Champion in WWE history, Brock Lesnar finally returned to the WWE. Brock had left the WWE after the defeat and match with Goldberg however Brock kept on fighting in Japanese wrestling and the UFC. Lesnar retired from UFC in December. He returned to Raw super show and hit John Cena with a F5, the famous finishing move of Brock. John Cena had lost to the Rock in the Wrestlemania XXVIII earlier. Fans were chanting we want Lesnar.Now its clear that Lesnar and Cena will have a fight. It will be great to see the pain back action. Keep an eye on Raw and Smackdown for more of Brock Lesnar.

Earlier this year, the showing entry and return of Rock was a great hit among the fans, Rock also made his victory over Cena. It will be a great contest if can see the Rock Vs Brock for the second time. Remember that Rock lost in the earlier Rock Vs Brock match.