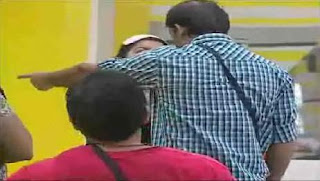 Big Boss 4 or Bigg Boss 4 season saw the wild card entry Dolly Dolly Bindra fighting again with the contestants this time it was Manoj Tiwari. It is shocking to see that Big Boss cared little about it and took no action against her. It seems it was scripted to send her in as she came with the sole purpose of fighting with each contestants. Earlier it was Shweta Tiwari whom she had an argument with. Dolly was also indulged in a bitter altercation with Sara blaming her of giving cold food.

It would be exciting to see what happens today at the house of Big boss here is the video of Dolly fighting with Manoj Tiwari over “kissi ke baap ka ghar nahi hai yeh” Ashmit the house captain seemed callous of the situation and was busy with Veena Malik instead on being question why he didnt say anything he started arguing with Manoj Tiwari saying it was his personal problem not mine.