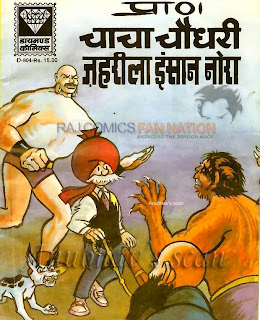 Chacha Chaudhary aur Zehrila Insaan Nora hindi comics, Chacha Chaudhary comics are published by Diamond comics in Hindi. Described as the most intelligent man in the world, Chacha Chaudhary is a old guy with no hairs on his head and white mustache. But to give you an idea that brain is mightier than sword the writer of the comics has made him weak yet smart and witty. Chacha Chaudhary fights crime, and bad guys also makes you laugh and solves mysteries. Most of the comics of Chacha Chaudhary are made keeping in mind the young readers which have age 4 and above. Some of his best friends and accomplices include, Sabu who is an human like alien, with amazing strength and body size. But Sabu has little brains. Rocket who is his pet dog, and his wife Bini.

Some of his enemies are Gobar Singh, Gabbar Singh, Dhamaka Singh, Raka etc. You can read his amazing comics online or download from the site of diamond comics. Here is one of his comics, called Chacha Chaudhary and Zehrila Insaan Nora. See how Chaudhary and his friends fight this monster and save innocent people in this amazing action packed comics. It would be wrong not to mention the cartoonist of these cute characters is none other than Pran. He is a famous cartoonist in India.