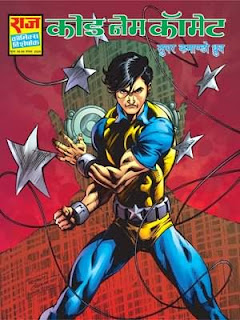 Code Name Comet is the new comics of Super Commando Dhruv published by Raj comics. The story starts when Shweta comes back home after studies and finds that his brother Dhruv is dead and was lost in an accident. Rajnagar and the family of Dhruv has lost all hope. While a man with similar face and is fighting crime on the other corner of the world. He is trying to find his true identity and is living by code name comet. Will this comics succeed in grabbing the attention of the readers, lately most of the comics have failed because of poor storyline and lack of storyline box, which prevents readers from knowing where the plot of the comics is heading. Hopefully the golden days of Hindi comics will be back soon when they put the storyline box back. Here is latest comics from Dhruv Code Name Comet which can be downloaded in pdf and ebook format from Rajcomics store at a price of 45 rupees.