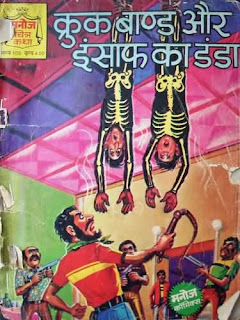 Crookbond Aur Insaaf ka Danda Crookbond comics. Crookbond was one of the heroes from Manoj comics, he was a comic hero and used to do the job of a detective his father was a police constable who was agitated about his son not doing anything useful. Crookbond along with his cousin Motu used to solve criminal cases. Earlier they used to rely on their hands and mental skills to defeat their enemies but in later comics, as enemies and criminals grew stronger, Crookbond found a super car which was an asset in his arsenal along with his scientist friend Cookbond used to fight the bad guys with wit and amazing scientific super powers. Manoj comics went out of publication in the last 5-6 years but their comics never fails to amaze the readers. Here is one old comics from the Manoj comics collection Crookbond aur insaaf ka danda in cbr format for download.