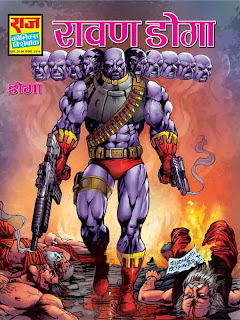 Doga is action hero from Raj comics he is brutal and finishes most of his enemies. Doga can be compared to Punisher who uses guns and his physical strength to overcome bad guys in his city of Mumbai. Here is Doga’s latest comics Ravan Doga. Doga who hides his face behind a mask is a young guy whose real name is Suraj. Being an orphan and brought up by gym trainers he has worked hard to become a masculine guy with amazing physical strength. He is a sharp shooter and has the ability to talk with dogs.

The story of the new comics Ravan Doga is centered around Mumbai where Doga who used to punish bad guys using his intelligence seems to have put an end to a religious preachers, a mental doctor, and Chief Minister of Mumbai.

Why is Doga doing this and even after this he has captured Sarikhi named preacher. People are calling Doga, “Ravan Doga” and burning his effigy. See what will happen and how will Doga come back to his original self.

You can buy the comics from Raj comics store link of which is provided here the comics is of 30 rupees.