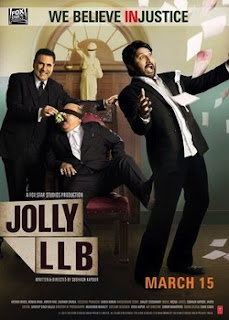 Jolly LLB is a courtroom comedy movie starring Arshad Warsi, Amrita Rao and Boman Irani in the main role. The movie was released on 15 March 2013. The story of the movie is very light and tells us how the judiciary and law in India is manipulated by some. Jolly LLB has been directed by Subash Kapoor. The movie has perfectly written dialogues apart from a few scenes overall its a good family movie. The story of the movie is about a young advocate Arshad Warsi as Jagdish Tyagi who has had little success with his profession, even his girlfriend, Amrita Rao (Sandhya) does not seem to be giving him much attention. Frustrated by all this one day Jolly or Jagdish sees Boman Irani (Tejinder Rajpal) winning a case in Delhi. He finds himself seeing a case
Much impressed by Mr. Rajpal, Jolly tries to read more about the case and finds that the facts have been manipulated by Rajpal to win the case. Jolly files a PIL in the court against Rajpal and the main story of the movie begins. Jolly who is a new lawyer and has little money has problems fighting a case with the mighty and rich lawyer like Rajpal.

The case on which they are fighting is a hit and run case where a rich lad from a aristrocrat family runs over his land cruser on 6 people. The eye witnesses and lack of evidence have allowed Boman to win the case so far. But as Jolly goes deeper into the case new mysteries and evidences are revealed. The corrupt police officials and lawyers threaten him not to go against Mr. Rajpal but he is determined with some help from his brother in law Manoj Pahwa, he finds the more evidences and at last defeats Boman Irani. The comedy is much like black humor and the dialogues are well timed, both the actors Arshad and Boman have show experience in their acting and no one other than these two could have fitted in this role.

Though many reviews have given bad ratings to the movie, I personally feel the movie has a great comedy and is atleast a one time watch movie. The movie brings you close to reality of how the law and judiciary in our country has not been able to deliver the right judgement. The movie has no good songs and the role of Amrita Rao is very limited. It has been said by Subash Kapoor that he might come up with a sequel if he finds a good story. Overall a rating of 7/10 will be given by me to the movie.

The cast of the movie is as follows :-