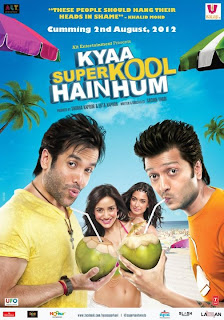 Kya Super Kool Hain Hum is the movie directed by Sachin Yardi, and produced by Ekta Kapoor and Shobha Kapoor. The movie is the sequel of 2005 Kya Kool Hai Hum, which was a hit. The new movie also stars Tusshar Kapoor and Ritesh Deshmuk who were present in the first part of the movie. But unfortunately we will not be seeing Isha Kopikar. The movie is set to release on 27th of July 2012. While some of the songs have already started to become popular, the story is yet to be seen. Will the story of new movie be as good as the last one, well the promos look aspiring.

The story of Kya Super Kool Hain Hum is about Manoj Singh played by Puneet Issar, who has two sons, Adi (Tushar Kapoor) and Sid (Ritesh Dehmukh). Adi who is a aspiring actor and is in love with Subbalakshmi (Neha Sharma). Sid who is a DJ meets, Swathi (Sarah Jane Dias) and falls for her. GK, character played by Chunkey Pandey, is a member of parliament, and is involved in anti social activities, contained by Ranjith. Also Chakravarthy who has spent 14 years in prison because of false charges imposed by GK is released. GK seeks revenge. Giri comes to rescue the family. See how the story ends and every one is happy at the end.