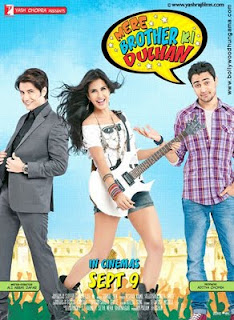 Mere Brother is Dulhan is a movie by Yash Raj Films, with all fairly new actors in the Bollywood, including, Imran Khan,  Katrina Kaif and Ali Zafar as the leading actors. The story of Mere broher ki Dulhan is about an NRI brother played by Ali Zafar who breaks up with his girlfriend and is now looking for wife to get married. (Luv Agnihotri) Ali calls his brother (Kush Agnihotri) Imran Khan in India to help him find a decent Indian girl for marriage by Christmas.

This is where Imran Khan meets (Dimple Dixit) Katrina Kaif who is the daughter of an Indian Foreign Services officer, whom he met in a rock concert.
Later as most of Yash Raj movies a grand Indian wedding scene starts with some songs and wedding ceremonies. Where we find, Kanwaljeet and Parikshit Sahni and their respective spouses play the in-laws-to-be; North Indian bumchums from the protagonist’s childhood hang around; a naaniji in a wheelchair glides by every now and then. The bride-to-be even has a demented brother (modelled on Dustin Hoffman in ‘Rainman’/Tom Hanks in ‘Forrest Gump’), who perennially holds a Rubik’s cube in his hand and repeats his sentences in a hackneyed staccato.

During the wedding arragements Imran Khan finds himself tangeled in love with Katrina Kaif, despite the incestuous connotations. Soon the slow brother, the country bumpkin buddies, and the groom’s ex, alongside the lovers, conspire to botch this impending wedding. It takes over two hours for this plan to come to fruition by when you are pretty much like Katrina’s demented brother in this film.

Aside from the cloying silliness of the venture, two crucial factors make the film a no-brainer: why would you imagine that reasonably educated young folks would jump into matrimony this easily at the risk of destroying their lives? While all the technology that represents the ‘young’ generation is carefully highlighted (Ali Zafar’s girlfriend in the film’s opening sequence smashes his LCD television set, Ali and Kaif have their marriage interview over Skype), the film doesn’t catch the pulse of the independence of the younger generation. Secondly, one cannot feel empathetic towards characters that are so insouciantly attempt to destroy their own lives, and that of those close to them.

The movie is an average and gains 3 stars in most of the ratings since no other big movie was launched during its week Mere brother ki Dulhan did a good business.