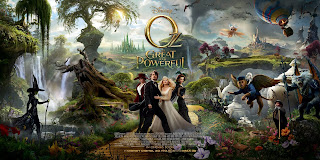 Oz the Great and Powerful is a movie from Disney it is directed by Sam Raimi and produced by Joe Roth, the movie reminds us of the old Wizard of Oz novel, where a little girl and her friends are in a magical island. The movie is based on the Oz novel by L. Frank Baum, this movie can be said as the prequel to the Baum’s introductory novel The Wonderful Wizard of Oz in 1900 and indirectly to the 1939 MGM film, The Wizard of Oz.
The movie was released on 8th of March 2013 and is focused on younger audience kids of young age from 6-10. The special effects and graphics of the movie are conventional 2D, as well as in the Disney Digital 3D, RealD 3D and IMAX 3D formats.

The story or the plot of the Oz the Great and Powerful revolves around a lesser known magician of circus called Oscar Diggs character played by James Franco, he is booed off stage in 1905 Kansas he finds himself in trouble with resident strongman. Heart broken by his sweetheart Annie played by Michelle Williams, he says farewell to his circus world and tries to escape in a hot air ballon. But unfortunately his canopy is sucked in a tornado, after a great tussle in the air, Oscar lands in the magical world of Oz.

Here in this world, a beautiful witch, Theodora played by Mila Kunis accompanies Oscar to Emerald City, where Theodora’s sister Evanora (Rachel Weisz) and the residents are under the fear of a cruel witch Glinda (Michelle Williams).

Though hesitant and a bit scared on fighting the wicked witch, he is convinced by Evanora others to help the innocent. It is not upto Oscar to find out whom to save and whom to fight before it is too late. Using his magical abilities and friends, Oscar feels magnified in power and makes him the best wizard. Rest you need to watch the movie to know more about how the things end and how Oscar fights the dark witches.

The movie is a must watch visual treat for kids, it has just the right graphics and special effects that make it an amazing blockbuster. It does not have scary scenes, dark stories, sensual scenes etc. The special effects are the same as they were in Alice in Wonderland, it does not mix the two world’s of Oscar and Oz. At times you may feel like you are watching some tv show or a play in a theater.

Though the script is a bit snappy and one liners might sound a bit lame. But the overall, storytelling and charm enthralls the audience,Oscar is the main character and the driving force behind the movie, while most of the female characters have a restricted role much similar to the original novel, Oscar’s character drifts from the original story and delivers some great dialogues which are right on spot.

This is overall an amazing movie for kids though adults may not enjoy it to the fullest some of the reviews have given it a 7 out of 10.

Cast of Oz the Great and Powerful
James Franco as Oscar Diggs / Wizard of Oz
Mila Kunis as Theodora / The Wicked Witch of the West
Rachel Weisz as Evanora / The Wicked Witch of the East
Michelle Williams as Glinda the Good Witch / Annie
Zach Braff as the voice of Finley the Flying Monkey / Frank, Oscar’s circus assistant
Joey King as the voice of China Girl/Girl In Wheelchair
Tim Holmes as the Strongman
Bill Cobbs as Master Tinkerer
Tony Cox as Knuck the Fanfare Player
Abigail Spencer as May
Bruce Campbell as a Winkie guard