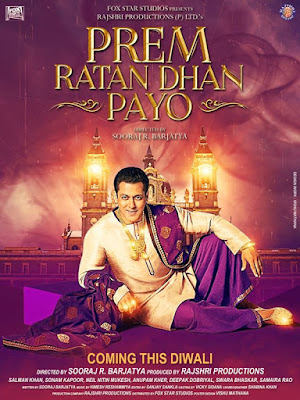 Prem Ratan Dhan Payo is a romantic thriller coming from Rajshri production house, directed by Sooraj Barjatya after a gap of 9 years. Sooraj has teamed up with Salman after the blockbuster Maine Pyaar Kiya of 1989 with the reel name of Prem, after which Salman has literally been parlaying Prem and has been inseparably associated with it.

Prem Ratan Dhan PayoSet in a magnificent palace and feudal background, the movie sees Salman in dual roles – as a common man Prem Dilwale and a prince called Vijay. Though lookalikes, their belief systems are totally poles apart. Sonam Kapoor plays the princess Maithili to whom Vijay is engaged, but then his evil brothers and step sisters’ step in and do evil designs for capturing his throne. As Vijay is assaulted by them, his father and Pritampur’s Diwan (Anupam Kher) asks Prem, who takes a liking to Maithili because of her charitable works, to play Vijay’s role, and thus protect Maithili.

The film starts with an enactment of Ramayana in a retro setup in Ayodhya, where Prem is the keeper of collective social consciousness, and sets out to meet Princess Maithili of Devgarh Fort, manages to enter the fort but at last is flabbergasted at the evil-work-at-play in the palace. He thus along with Kanhaiya (Deepak Dobriyal) steps in with all good intentions and displays moral attitudes, so as to rescue the palace from its evil designs and protect its integrity from damage. Alongwith him is Maithili who has to strictly act in accordance to royal decree and can’t breach it.

The movie has all the likings of a grand family entertainer – Yuvraj Ajay Singh (Neil Nitin Mukesh), Rajkumari Chandrika (Swara Bhaskar), Rajkumari Radhika (Aashika Bhatia) and Chirag Singh (Armaan Kohli) who all fight to keep their influence intact and play spoilsport in this basically rivalry-between-relatives movie. Many scenes in the movie makes an instant connect as the movie is set in familiar background of 80s and 90s which a family can really connect to. Himesh Reshammiya’s songs in addition give a strong retro effect to the movie. The movie takes twists when Maithili is drawn to Prem but Vijay too comes into the scene after a hiatus.

Though a bit long at 2 hours 45 minutes, die-hard fans and movie goers have been full of praise for the movie as first half has been termed breezy and second half full of action. All the emotions are in full display in the movie at right places. It comes with a realisation that even today in the age of technology and modernity, family values and traditions do matter and should not be taken for granted. All the grandeur of a palace life is in full display in the movie, but still connects with the common man – superb story background and stellar performance by Salman and Sonam are stand out features.

Die-hard fans of Salman Bhai should definitely have a watch, for after his Bajrangi Bhaijan, which was one a different plane altogether, Salman has shifted his gears for this family entertainer and how!! All in all, it can be termed as a perfect Diwali entertainer, despite certain flaws which is overcome by the strong message it preaches : Family matters a lot.