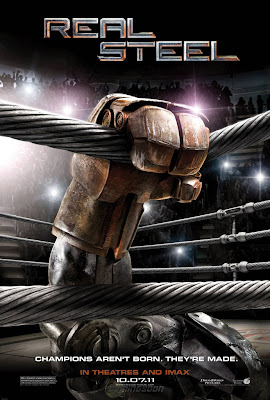 If you loved Transformers and Rocky series then this movie is a must for you. You will see robots fighting and high tech technology from the future. The movie stars Hugh Jackman in the lead role. Real steel is a movie which revolves in the future the year is 2020 and “Robot wrestling” is a popular money making sport. The lead star Hugh Jackman who plays the role of a former boxer Charlie Kenton is a poor man he has bills to pay. The Robot boxing business seems to be a good place to earn money.

Charlie and his soon Dakota who were seperated meet there in the ring once again. The two father and soon seem to come close with this Robot wars. The son is the brain while father uses his boxing skills to help win the war.

The movie has action but since the robots are controlled by humans sitting far apart so no one gets hurt in the movie. There is no blood, bullets or double cross games behind the scenes in the movie. The movie has well depicted, fiction, the fights, relationships, re-discovery of self belief in the lead character.

As far as the boxing of robots is concerned, it is pretty much like any movie on boxing. An underdog takes on the champion…who wins?

What sets the film apart is the treatment and the incredible CGI. Your jaws drop when you see those eight feet tall mighty giant robots enter the ring! The sound effects are mind blowing, especially when the robots punch each other. The bond shared between the father and his son and their robot is endearing.

Acting of both father and son have convincing appeal which touches your heart at times. Overall the movie is a must watch and is doing good business overall.