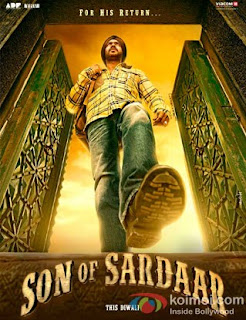 Son of Sardaar is the new movie starring Ajay Devgan. Once again the theme centers around a Sardaar if you remember similar concept movies like Singh is King and Love Aaj Kal have worked well on box office. So it was now Ajay’s turn to play sardaar. The movie has been abbreviated SOS. People have been searching Son of Sardaar reviews over the internet as well. The movie is directed by Ashwni Dhir, and is a remake of south Telugu movie Maryada Ramanna, which is also a remake of 1923 classic American silent movie called Our Hospitality. Movie Son of Sardar released this Diwali on 13 November 2012. Starring Ajay Devgan, Sonakshi Sinha, Juhi Chawla and Sanjay Dutt in the lead roles. Music in the movie is given by Himesh Reshammiya.

The story of the movie revolves around Jassi (character played by Ajay Devgan) who falls in love with Sukhmeet (played by Sonakshi Sinha) when they first meet in a train. He then lands up as a guest in the house of the Sandhus a mad house full of funny Sardars. The head of the house is Billu Paaji played by Sanjay Dutt and brothers Tony and Tito played by Mukul Dev and Vindoo Dara Singh, who have sworn never to have  ice-cream and cold-drinks until they avenge their father’s death, there is also a kid sardar who talks about pegs. Also in the movie is Pammi who is Juhi Chawla. Jassi who is a London resident has come to India to find about his family’s past and know more about his ancestral property which is in Punjab.

Jassi who is a London resident has come to India to find about his family’s past and know more about his ancestral property which is in Punjab.

Jassi does not know that  Sandhus have been sworn enemies of his family. But even they are not laying their hands on Jassi as he has come as a guest equals Bhagwan. See how, the the movie ends and goes in a rip roaring laughter. It is not that funny to make you lungs burst with laughter but an ok comedy which you can watch with your family.

The cast of the movie includes

The movie has received 4.3 rating out of 10 on imdb and other sites which have written Son of Sardaar review.