The One Punch Man is a Japanese Anime and ongoing webcomic, the anime series is a manga adaptation. The hero of the series is called Saitama also known as the One Punch Man. Recently the Season 1 of the One Punch Man came to an end with 12 episode run. The reason why Saitama has been in news and viral over the internet is that he is extremely powerful super hero and no villain has been able to last more than 1 punch against him yes that is right just one punch and boom all the super villains vanish in thin air.

The series has been created by the author and artist who goes by the pseudonym ONE, still people are not sure who the ONE is but he has a team of artists now to help him create the anime series. Also an official website has been launched for OPM you can check it out here http://onepunchman-anime.net/movie/ and watch all the episodes.

Who is One Punch Man (Saitama)

Saitama as we know him is an ordinary man more common than Clark Kent, because no one knows him he has no friends he lives alone in an apartment, he has no job either. Saitama’s world is full of mutants and the world around him is changing rapidly like a guy who eats to many crabs becomes a crab mutant such is the environment of Saitama. He lives in a metropolis of City Z. Cities around him are named A to Z. These cities are often attacked by strange monsters and hence the people of these cities give some money to the Heroes Association, the place where heroes breed it is a kind of University or something like SHIELD from Marvel comics. These heroes are graded after physical and mental tests and placed in various classes, S being the topmost, the heroes are paid according to their rankings and these rankings increase with each fight. Unfortunately our hero Saitama was placed in Class C while his cyborg disciple Genos is placed in Class S.

The physical strength of our hero Saitama is immense and unmeasurable so far as no villain apart from the last 2 episodes of season 1 villain has ever been able to hit him or even move him an inch. We came to know about his physical strength during his entrance exam to the Heroes Association. You see, Saitama always wanted to be an hero and so as he narrates he did extreme workout which according to him made him the most powerful being on earth so far. During his exam he was lightening fast in running, broke the ceiling in high jump, broke the wall in power punching test etc. still seems to have been graded low in his mental abilities test.

As Saitama’s physical abilities have grown over time he narrates that he has lost his hairs and also lost emotions, he does not feel, happy, sad or angry very easily. What makes him happy are Supermarket sales, one day he is shown to be fighting a villain and all of a sudden he recalls that today is supermarket sale, he kicks the villain and runs towards his home.

During the finale episode new levels of his strength are revealed. Saitama fights Boros, an alien lord who has come to destroy earth. Boros hits Saitama so hard that he lands on the surface of moon still unscratched, from there he propels himself back to earth hitting Boros. He defeats the evil lord without much effort. Genos who is the cyborg disciple of Saitama and has been saved by him several times knows that his master has limitless powers and wants the world to respect him, but the citizens think Saitama is just fooling people, and a true hero looks more like a Superman with more charisma. Well they are made to eat their words soon. The secret of Saitama’s power and its limits are yet unknown. 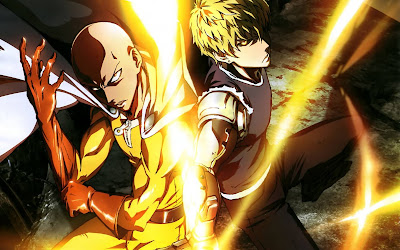 The season 2 of One Punch Man

After the successful Season one the fans are waiting for the next season of One Punch Man. The creators are aware of the hype created by this amazing super hero and have announced the official website. The first full OVA episode of anime was released online.