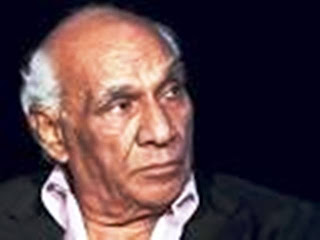 Nine days ago Yash Chorpa was diagonsed with dengue, the iconic filmmaker and director Yash Chopra did not respond to the treatment and passed away because of multi organ failure on Sunday evening. Yash Chopra died at the age of 80. The legendary director has worked for more than 5 decades in hindi cinema he has worked with Ashok Kumar to Rajkumar, to Shah Rukh Khan and Mala Sinha to Anuksha Sharma and Katrina Kaif.
He had developed acute respiratory distress syndrome (ARDS) when he was admitted to the Leelavati hospital. Some of the biggest movies made by Yash Chopra include Waqt, Daag, Deewar, Trishul, Silsila, Kabhi Kabhi, Darr, Dil to Pagal Hai, Chandini, Lamhe, and Veer Zaara

Everyone from the bollywood industry was present to pay his final visit to the ace director of film industry, some of the early visitors included, Dilip Kumar and Saira Banu, Vishal Dadlani, Parmeet Sethi and Archana Puran Singh, Rani Mukerji and her mother.

Recently he had made a movie with Shah rukh Khan, called Jab Tak hai jaan starring Katrina Shahrukh and Anuksha Sharma, unfortunately he passed away before the movie was launched.