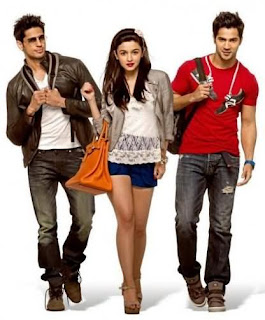 SOTY or Student of the Year is the new movie from Karan Johar, which has all young debutant actors including Alia Bhatt cousin of Pooja Bhatt. Varun Dhawan, Siddharth Malhota and super star of his times Rishi Kapoor. You must have heard the lately hit song, Disco Deewane. Well the original disco Deewane to what I remember was song by Kavita Paudwal, she is the sister of Anuradha Paudwal. Back to how the movie is. Well most of the reviews have given a 3 or 3 and 1/2 star out of five to this movie. Karan Johar has once again created a love story.
The movie is inspired from the Mansoor Khan’s classic “Jo Jeeta Wohi Sikandar”, where the bicycle race has been replaced by intra school Triwizard Tournament like you have seen in Harry Potter and the Goblet of Fire movie. The winner of the contest becomes the Student of Year.

Though there is a twist, as the plot is more focussed to love triangle and lesser on personal vindiction. The young actors not only have good physique but also have done some good acting in the movie.

The story of the movie is about 2 guys and a girl. Abhimanyu Singh character played by Sidharth Malhotra and Rohan Nanda played by Varun Dhawan, they both are guys who envy each other and have a competitive feelings for each other. The story revolves around St. Teresa’s High School, Dehradun. Abhimanyu also called Abhi is from a middle class family and wishes to succeed in life and prosper, by winning the Student of the Year trophy on the other hand, Rohan Nanda aka Ro, is from a rich family. His father is a business tycoon.
The tussle between the two for the trophy has grown big and they can be seen clashing in locker room, football field, classrooms and canteen.

Though they turn into friends unexpectedly, things further complicate when Shanaya Singhania (Alia Bhatt), comes between the two. Yup that’s right one more love triangle story. Shanaya and Rohan who were childhood buddies, Abhi’s inclination toward’s Shanaya causes the rift in the two hero’s friendship.
At the end it is the fight for the Student of the year trophy, where Dean Yogendra Vasisht’s role is played Rishi kapoor. See how the story ends and who gets the girl in the end. You need to watch the movie to see how it ends.