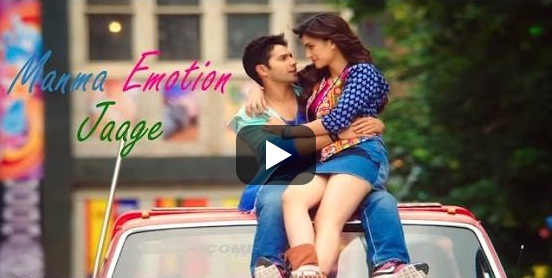 Here comes the second song from movie Dilwale titled ‘Manma Emotion Jaage’, with quirky lyrics and modulated voice strings. This comes after the hugely hit romantic number ‘Gerua’ released last week. Gerua became such a viral hit that it has grossed 10 million hits in just a week, which might have enticed Dilwale team to come up with their second song.

The link for the video was tweeted by Varun Dhawan, playing a pivotal role in Dilwale, slated to be released on 18th December, having an ensemble cast of Shah Rukh Khan, Kajol, Varun Dhawan and Kriti Sanon.

The music is directed by Pritam and is a fast paced, high-on-visuals song with scintillating camera angles and picturesque visuals. Big cars lining streets one after another, the song starts with background music resembling car horns, and gets you grooved from the word go.

The song hits full steam when Varun jumps out of the front bonnet of a car and gets into an appealing dance movement right away. Kriti, dressed in a red skirt, too gets in act with him and both team up well for this foot-tapping out-and-out fast number. The architectural marvels in Bulgaria with a funky hip-hop track and a Bhojpuri twist in it are the major highlights of the song.

Emotion Jaage’s music is characterised by quirky lyrics and high on beats, in line with today’s generation needs, whereas song ‘Gerua’, which features SRK and Kajol leans more on the soft romantic hues. Pritam has thus tried to differentiate between SRK-Kajol and Varun-Kriti pairs using his enigmatic music tunes!

The song is sung in male lead is Amit Mishra and female lead by Anushka Manchanda; lyrics has been penned by Amitabh Bhattacharya. The song is choreographed by Remo D’Souza. The songs has the typical Rohit Shetty ishtyle to it.

The song was released by Dilwale team along with director Rohit Shetty in a function in Mumbai.

Hope the song does “Emotion Laage Re” moment for its users. By the looks of it, it ahs already found a chord especially with young fans, as the song has already clocked 3.5 lakh views within 48 hours of its launch.