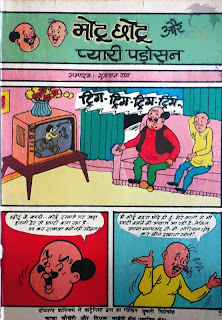 Chotu Motu are cute and funny characters from Diamond comics they had even cartoon shows made on them. The two are two foolishly acting characters who get into trouble but are always saved by luck. They are usually the good guys. But Patlu at times becomes money minded in some comics. Here is an old diamond comics from them called Chotu Motu aur Pyari Padosan. They are also known as Motu Patlu in later comics.

Download Chottu Motu Pyari Padosan from here Motu Patlu comics
They two are very popular heroes from Diamond comics, there were tv shows and video cassettes launched on them as well.