Many have been curious, cynical, sceptic and even predicted complete overhaul of DC through their latest venture that everyone is talking about – the Rebirth. Rebirth is essentially a revolutionary change brought about by DC comics to account for the cultural, social and ethical changes that generations have undergone since the time DC established its series of comics. The comics heroes grow as we grow – they reveal themselves to be time capsules and thus is a complete shake-up of DC’s creative team.

It’s not a reboot – nothing that DC’s live stream suggests that Rebirth anything close to reboot. It’s a new philosophy, a new chapter in the whole saga of DC journey, on the lines of new 52 series. Embracing the characters of pre- new 52 era, basically re-introducing characters that have not found their way into new 52 series. Superman is going to be from pre-new 52, whereas Batman and Green lantern are going to be from new 52 series import, thus combining the best elements from both the series, something like Marvel did to its own series.

This means we are going to witness Dick Grayson is going to be Nightwing again, but here comes the shocker – it has been mentioned that someone is going to die in the first series of Rebirth. New storyline, new costumes, new and more powerful characters, merging of universes in myriad ways, intergalactic adventurism and threats and all – over and above, all the monthly and twice monthly issues would now be available at a lower $2.99 price tag, which is a huge bonanza for all us Comic maniacs! In addition to this, there will be a host of new #1 issues.

Geoff Johns, Chief Creative Officer of DC has also come up with an all-star roster of all the changes to be brought about – Green lantern corps, Wonderwoman, Cyborg, Aquaman, Justice League, Hell blazer, Red Hood and Outlaws, and Suicide Squad etc.

Batman seemingly died alongside Joker in Endgame story but was resurrected using Dianesium, making Batman faster and stronger than ever before. While Batman got to know about secrets of Joker when he sat in Mobius Knowledge chair. This sequence has an important lead upto the Rebirth as it exploits the already delicate situation after Superman’s rebirth from Apokolips fire in Darkseid War. 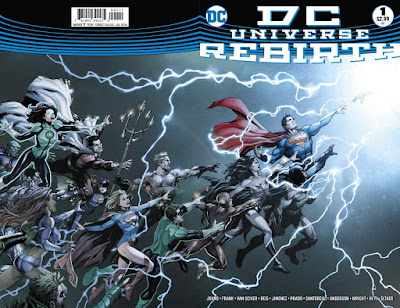 Thus as DC says, it is not about only bringing things back from the past, like Hal Jordan, Sinestro, core green lantern it is also looking clearly on what each of the character stands for. Flash rebirth with his flashback and family’s history gave more credence to his story and get back to essence of Flash. Flashpoint story of 2011 where Flash brings a letter for Batman from his father Thomas Wayne is also important to get started into Rebirth realm.

In all, the need for Rebirth being summed up in one single line, “love this world, but there’s something missing”.