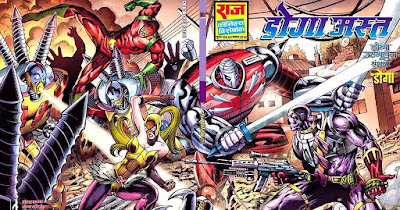 Doga Ast is the final part of the Unmoolan  series of Doga comics, the 8 part series started with Doga Nirmulak. Where we come to know more about Doga’s past where he used to live in slums. One day he meets a young boy named Ansh while he had stolen a peace of bread because he did not have money. The boy becomes his friend and takes Suraj aka future Doga home, where he finds that some gangsters have killed his parents. 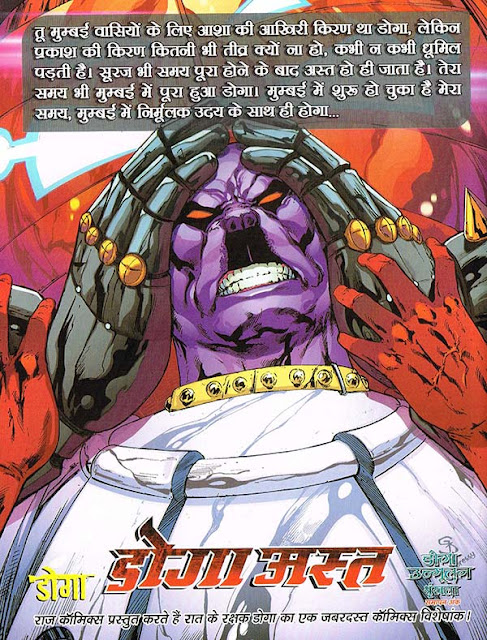 Ansh and Suraj run for their lives and are separated in the event.

In current day story a villain named Nirmulak has shown up to kill and tarnish the name of our hero Doga, by killing innocents and rampaging the town wearing his mask. All this was done for money offered by a gang leader.
Doga Ast is said to be the final part with the comics containing over 80 pages instead of 64 with 100 INR as Mrp and full double sized cover. Comics will be availble for download and purchase of the Rajcomics store soon.
Hopefully the comics will share some new insights into Doga’s past and also I think Nirmulak will either turn as friends with Doga or will die. Because Ansh may be Doga. His face was damaged. All this will be completed in this final chapter. Over all the series was well written compared to other Raj comics which are currently going at their all time low like the Sarvnayak series which has ended up in a disaster and the Rajnagar reboot series. The drawings have been amazing in this comics as well while the other artists in Raj comics have not been able to live up to the previous standards set by artists like Anupam Sinha ji, Bedi ji etc.
We will share the complete story as soon as we get our hands on the book.