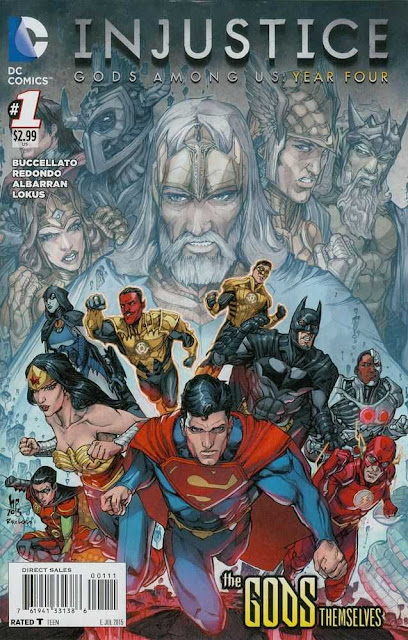 Year 4 begins with a setting of Olympus – a kingdom whom very few believe to be existing, and still fewer seen it.. but Olympus is hardly the magical folklore that many believe it to be – inhabited by numerous gods. Ares and Hercules discuss situation on earth. Hercules remarks that he would never go back to earth as he made a promise to his father but still he misses the excitement. They conclude that mankind needs to be put back in its place as they consider them as footnotes in history and irrelevance.

Earth has undergone transformative changes in last 3 years – peace has prevailed which had its own costs for Justice League and Superman specifically – he lost Lois, unborn child and a bit of humanity too. Pondering where Batman is sitting on his self appointed throne in Hall of Justice, ever since their battle involved Heaven and Hell and death of Huntress. Superman feels Batman is still out there planning and plotting to get Superman and that his allies are not doing enough to get to him. But Hal Jordan, the yellow lantern retorts and feels that Superman is dictating his terms and treating him fairly, to which Clark shrugs him off. Just when the situation was getting out of control, Wonder woman steps in and recalls how Huntress before getting killed called all of them as Tyrants and warned Superman “The last thing you want to do is turn allies into insurgents”.

Robin in his chat with Cyborg exclaims that he will get to Batman more likely than anyone else to which Cyborg sarcastically tells that he’s delusional. But Robin being serious tells him his intent with a good blow. Batman is standing over a mountain top, where Ares the God of War is standing. Batman, with a bearded look tells him “I’m in for your proposition”.

Meanwhile, Renee Montoya is drinking herself into a stupor, the war between Superman and Batman has cost her Huntress and she’s about to get her revenge. She decides to attack Cyborg and Robin and thereby get Superman’s attention. Cyborg is cleared, leaving deck for Robin who throws a Bat-Ring on her and breaks her head. She then upper cuts him into the sky and grabs him by the head, calling out for Superman, who is sitting with his parents asking whether they are afraid of him. But through his super hearing judges Renee’s voice and goes off to help Robin.

Meanwhile, Billy Batson is being pulled out of school by a woman claiming to be his mother – Harley Quinn! She walks him out and asks to accompany her on a motorcycle to which he refuses; he slams him and takes him away. Kyle is gearing up to leave in Bat-jet with help of Alfred to be guided by voice commands as Bruce has authorized all member of Resistance to operate it. Superman comes over and knocks Renee down, who gets energized by taking an overdose of super strength Green pills and attacks Superman back with oozing energy and flexing muscles “I’m gonna kill you Superman!!”

With full force Superman attacks Renee and she crashes onto Washington Tower, who then rips it off to hit Superman back. The green pill overdose start to show their side effects as Renee starts to reel and writhe. Superman asks her to stop seeing the strain in her heart, but Renee continues but suddenly falls to the ground spewing green liquid all over. Wayne alights from helicopter and runs over to Renee who is by now dead. Superman, to the surprise of Wonder woman, Flash and Hal, asks him to take her and go, and finish off this war once and for all. Wonder woman retorts “Clark! We have been searching all over for him for months.. Now’s your chance to take Batman down!” Superman replies “This is not Batman, its Bruce Wayne… This war has cost us too much.. Its over, say it Bruce!” With tears in his eyes, Bruce tells him “Its over”

Batman takes Renee back to his hideout, dons his cowl again and tells his sceptical friends who opine hat they stand no chance against the full strength Superman team “It isn’t over!” As Batman prepares for his next mission, Barbara Gordon calls Lex Luthor, there secret agent in Superman team and Lex starts an experimental procedure to repair her broken spine, because in this universe Barbara is still crippled by the Joker. He’s also working on his own project – a clone of Superman. Meanwhile, Billy Batson wakes up with Harley Quinn standing in front of him and he tied to a chair in a secret hideout – the Quiver, that looks like Green Arrow’s old hideout but which is now unoccupied. She gets a call to Batman’ hideout, gasses Billy and leaves him tied to the chair.

Batman prepares his team to the big move that is coming and Barbara surprises everyone by walking in as Batgirl. When Batman tries to stop her, she retorts that its her choice and not his. Harley backs her. Earlier, on the request of Hippolyta, daughter of Ares, Zeus agrees to her plan to confront the Superman. Amazons march on Hall of Justice, with Hermes demanding that by the decree of Zeus, Superman leave Earth or suffer their wrath. Wonder woman is in shock and demands from Artemis to know who ordered this attack.

But as it has went in Themyscira, a deal was struck to wake Wonder woman from her magical sleep and it was that Hera was owed a favour and it was to have Wonder woman’s mother march the Amazons on Superman for daring to treat himself as a god. Her mother just refused, but Hera imprisoned her. Upon hearing this, Wonder woman grabs Hermes “My mother better not be hurt”, and orders Amazon to stand down. But she holds no dominion on them right now on Earth. As Superman and team wonders how it all got started, Batman and team arrives in the Bat plane. Superman demands to know whether Batman has forgotten the promise he made the last time they spoke. “No, you are wrong Clark, its not over. I had nothing to do with this, it was your mother Diana.” Hermes impatiently asks Superman, “What is your answer?” Superman looks at Wonder woman who says “we should settle this by combat.. One champion in each side, to he death”. Hermes accepts the challenge. Superman comes to the challenge with Batman instigating
Wonder woman to fight him on behalf of gods. Wonder woman attacks batman “how dare you”, and the war starts with a lightning shriek “Enough!” and Zeus stands before everyone. I will not have this divine challenge ignored, by my daughter or anyone else. All in shock with these words, Wonder woman demands from Zeus, “How could this war be! My mother would have never agreed to this.” Zeus explains that due to her awakening she must fight on the side of Hera, and if she refuses her mother will die. So she apologises to Clark and they begin their battle.

Wonder woman brings in her sword which is shattered by Superman’s forearm, and then gets a right hook causing her to bleed. She then kicks him and punches him in the gut but Clark head-butts her, blasting her nose, inciting the rage of Amazon! She elbows him on the knee, gouges out his eyes and breaks his arms. Clark opens his heat vision, but Wonder woman holds her shield and walks into it “You know this wont stop me Clark!” She lunges forward with a strike on his jaw but with his full strength he counter punches her. Wonder woman wants him to yield as he doesn’t want to kill him. Hal Jordan looks onto a fallen Superman and realises that it isn’t the Superman he knew – Superman was fearful as he was linked to Humanity through Louis, but now he isn’t. The yellow ring can sense fear but he can sense nothing in Superman – he’s now beyond caring about himself or anyone else. Wonder woman holds him by his symbol “Its over!” As she prepares to take his life, a yellow blast takes place – Sinestro has arrived, and he’s not going to see Superman lose. Zeus exclaims, “Who dares” as everybody looks in utter shock. Superman throws Sinestro away “No more from you!” Zeus turns to his army “You know the task that is before you Hermes” and Amazon army attacks Superman army. Damien stands before Batman “I’ve waited for long time for this one Dad” Batman knocks out Damien. Hermis runs over to Flash and knocks him over. Superman uses his super breath to push everyone down. The gods arrive.. Superman!! shouts Apollo you have incurred the wrath of the gods. Surrender or Die!!, surrounded by fellow gods – Atlas, Eros, Hercules and Athena.

Cyborg immediately calls for the help from fellow mates in Justice League as they are gonna need everyone – Raven refuses to join as she’s mourning the death of her father Trigon. Billy is still unconscious in the quiver with Ares looking over him, Lex is working on Superman clone. Superman stands silent with no reinforcements. Hermis sees Superman defeated and asks him to abdicate and leave Hall of Justice and orders Artemis to pull back and make camp. Batman cant believe it – they have Superman on the run, why are they pulling back!! We cant give time to fortify their position, but Hercules retorts him “There is no we, mortal! Its the will of my father” Superman walks back into the Hall with his injured friends, as Hermes tells Diana to stop and come with him as she now stands with Zeus. But she turns furious and attacks him despite Superman’s call to stop. Hercules comes in and hits wonder woman so hard on head that she bleeds. Cyborg’s amplifies Sun’s rays to repair Superman’s arms and they begin battling the Gods gain. Hal Jordan tries to take on Hercules, but gets damaged. Harley knocks him over while Hercules tells her its his fight. Hal hits Hercules with a blast of Fear but Hercules ignores it. “Your fear mongering days are over!” and goes for an ultimate punch to kill Hal, but gets blocked by Superman, and with Wonder woman start to battle Hercules. But Hercules upper cuts Superman into space and grabs Diana by the throat. Batman team look in shock and wonder is this what they wanted??

Meanwhile, in Quiver, Ares approaches Billy and removes tape over his mouth – its time, Superman needs you! Billy shouts SHAZAM! and the superhero with the power of Gods prepares to enter the battlefield! Shazam has the wisdom of Solomon, strength of Hercules, stamina of Atlas, power of Zeus, courage of Achilles and speed of Mercury – thus having power of 6 gods! As Hercules gets ready to kill his own sister Wonderwoman, Shazam slams him from behind! Hercules slams him in the face but retorts by slamming him in the gut. Batwoman kicks wonderwoman as she is down with regaining her breath, avenging Huntress death in Year 3. Using Lasso, she wraps around wonderwoman’s neck. Meanwhile, Hercules – Shazam duel is ratcheting up with such force that earth is shaking. Shazam thunderclaps Hercules ears, headbutts him and double slams him on the back.

Superman, in the space because of Hercules uppercut, realises that this is the end and comes rocketing back to the earth with unbelievable speed using all force in entering orbit and finishes off Hercules burying him into the ground. Every one is just stunned as Superman has just killed a demigod! Apollo shoots Superman in the shoulder, Shazam removes the arrow and punches Apollo with rest of the gods jumping in to fight Shazam.