Injustice Year 4 Volume starts with Batman and Damien battling each other. This is the longest running series in the DC history. Meanwhile Batman- Damien duel continues with Batman hit with a baton, but still trying to pacify his own son that he’s the most skilled fighter in Robin costume. But Damien screams “Don’t say it too loud, your favourite son may hear you!”, referring to Dick Grayson. But Batman retorts “Its not about Dick, Damien”.

Damien, not in a mood to relent harps back “Its been always about him”. “Come back to me Damien, we can be Batman and Robin again!”. But Damien in no mood to listen tears off his arc and shouts “I will never be your Damien”. Batman knees him in the stomach as he prepares to leave and knocks him out.

As Shazam battles the gods, he is struck by lightning and suddenly gets transformed back to Billy Batson! He falls to the ground and there stood Zeus before him. He stares at him and shouts the word that brings him powers of 6 gods – SHAZAM!! but to no avail. All seemed lost. Zeus stares at him, and gets him by collar – I am your father. You have your powers because I granted them! No more will you hurt my children. He then warned Superman to abdicate his throne or he will punish them all, starting with Billy. Harley tries to rescue Billy, but Zeus with a single strike of lightning bolt clears Harley. Sensing that he doesn’t stand any chance, Superman sends back his team to their home cities to wait for word from him and all disperse.

Once the battle has ended, the world asks the question : What’s Next?? Are the ancient gods going to rule Earth now? Where’s Superman going to go? and whether they can do something to get back powers from Superman? At the Hall of Justice, Ares approaches Superman to continue their plans – Ares has been playing both sides in this bitter war! He was not supposed to be the god of war but was turned into one because of his love for wars. He informs Superman that Zeus can only be stopped if his brothers are involved in the war – Poseidon and Hades. 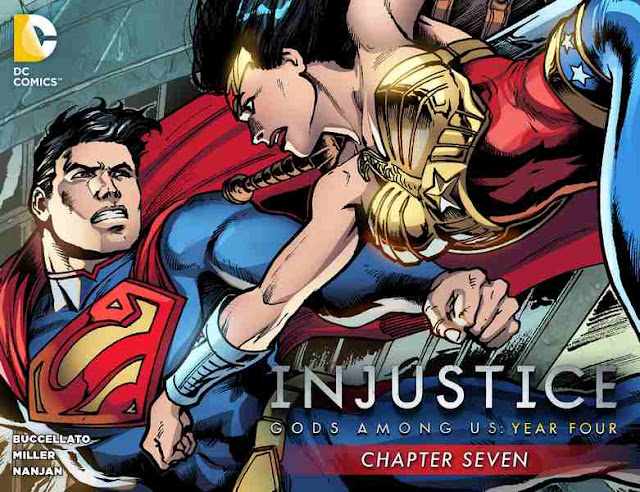 Meanwhile at Themyscira, Wonder woman barges into Batman’s tent and demands how he dare to approach her father and because of him war has happened. Batman reasoned “he only wanted Superman to surrender” and he didn’t call for trial by combat and it was she who wanted it. The ground beneath them suddenly started to shake violently and they run outside, only to find a monstrous wave approaching them. Batman observes that the waves have suddenly paused and there comes Poseidon! He’s holding the water wall and Wonder Woman demanded to know the reason. Poseidon wants Zeus to abandon this pointless pursuit and return to Olympus. A blast of heat vison takes down Hermes – Poseidon stands with Superman, the Kryptonian.

Batman takes the help of Aquaman who refuses to show up; Wonder Woman is raged and attacks Superman on why is involving so many gods in this fight. An arrow from the Amazon army flies and hits Poseidon, and he lets the waves come down on the island.