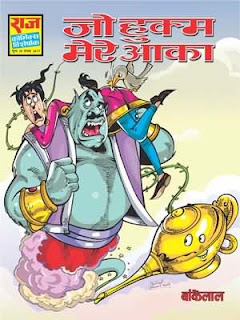 The next comics in 2012 January set 1 of Raj comics is of comic character Bankelal, where his evil plans to capture the throne of Vishalgarh and remove muchchad Vikram Singh who is the king. But as Shivji has given him curse that all his evil plans will turn into some good, Bankelal is never able to do any harm to anyone. This time bankelal has come up with a new idea where he has himself got a boon and a curse for Vikram Singh. In the boon he has got a magic lamp which fulfills his wishes.
The ginnie in the magic lamp is a reverse of what normally happens this ginnie is asking Bankelal to fulfill his wishes read the comics to know more of what happens in this funny comics from Raj comics in Hindi. Download the comics from Raj comics store link is given below.Jo hukum mere aaka is a funny comics.