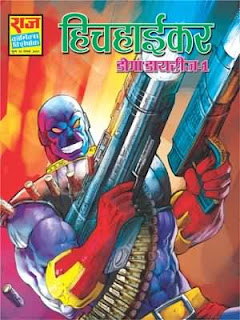 Doga Diaries 1 named Hitchhiker is a set of Doga Comics which has some rare stories of Doga. According to Doga these stories were never told before and are more brutal and Doga had forgotten these events in his life. As usual the comics is filled with some amazing action gun fights from Doga.

Doga who is a masked warrior who has decided to wear a mask similar to that of a Dog. According to him dogs are faithful and reminds him about his early life when he was young and had no food and money to survive. He was a orphan boy. Doga or Suraj was then given shelter in the Lion gym by Adrak, Dhaniya, Mirchi chacha who taught him how to fight and defend people. Doga comics is surely not for kids. Doga has no special powers and can be considered similar to Punisher.

More Hindi comics can be found on neeshu.com comics section