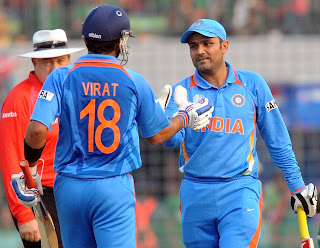 India Vs Australia Match from the Commonwealth Bank Series will be played tomorrow on Sunday 26 Feb 2012 at 14:20 Local time and 8:50 IST. Seeing the tussle between the team senior players its hard to say if the team can win again a match at the Australian soil. Earlier loss where Sehwag was the captain Dhoni and Sehwag played the blame game on each other. The real reason for loss is the over all failure of bowlers and batsman. Overseas conditions just seem too harsh for the Indian team. We need to see if the team can win against the formidable Australian side or not. India is currently at the bottom of the points table and has been defeated by Australia and Srilanka both.

Bowlers like Irfan Pathan who have been doing well were kept away from the series due to politics its sad to see that the talents like him are being wasted. Irfan made a quick 47 runs in the last match giving some hope while chasing against the Srilankan team. He also bowled well.