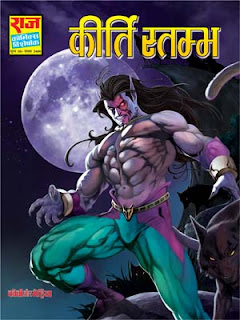 Kirti Stambh is latest comics of Kobi Bheriya series, which has nearly all villains of Bheriya joining hands to fight against him. They unite to bring back powers using the pillars called Kirti Stambh. In the jungles of Bheriya tribes are fighting for the biggest Kirti Stambh. And they fight against each other to get the biggest pillar see how Bheriya stops the fight and saves the tribes as well as his villan. The comics is available for download from the Raj comics store.
Kobi and Bheriya live in the jungles of Assam and fight criminals and evil villains from their.