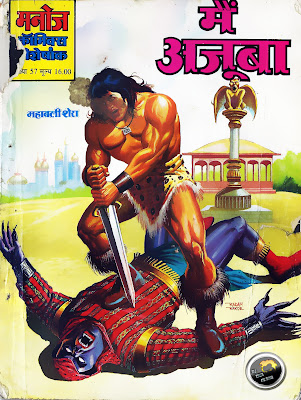 Manoj comics which was once a hit in comics industry no more publishes comics. Mahabali Shera was one of its powerful heroes. He lived in jungles and used to fight the evil monsters and bad guys to save humans from any harm. He used is strength and brain to defeat his enemies. Though the drawing of Manoj comics was only the best in Ram Rahim Series but the story in most of the their comics were much better than any other comics of that time. I remember buying a comics for 3 rupees which had a really good moral. But as usual most of the Manoj comics had parts. The reason for Raj comics success was that it had no or little parts. Here is Main Ajooba comics from Mahabali Shera.