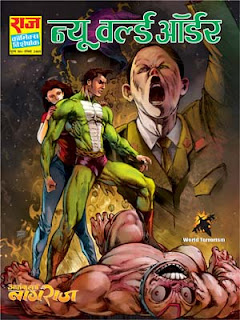 New World Order is the part 2 of Atankharta Nagraj comics where in part 1 “Order of Babel” you have read that Nagraj is in Germany to fight a criminal gang who are killing people. The killing is based on people who are handicapped and involved in criminal activities. They say they are fulfilling the orders of Hitler. The gang is too powerful and has really brutal and powerful members. Even Nagraj’s super powers seems to be failing infront of them. The second set of 2012 of Raj comics has been released and this is one of the most awaited comics in this set. Nagraj fans have been eagerly waiting for this comics. Here is the comics from Raj comics store for download.