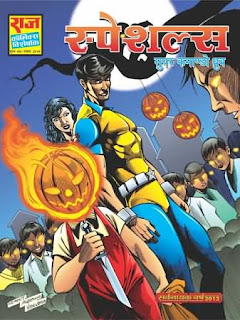 Specials is the new Dhruv comics from Raj comics set 5 of 2012. Super Commando Dhruv’s latest comics filled with action and mystery. I remember earlier comics of Dhruv were more like some murder mystery filled with action and every page opened some new questions for the readers keeping the comics more interesting and indulging. Now the comics have become blantant though the drawings have improved but the storyline has gone down. The latest comics Specials is about dark magic. The story is about Voodoo who has come back with his dark powers, this time his powers have increased and he has new tricks to put Dhruv down, and bring him on his knees. Read the latest comics online Specials Dhruv comics can also be downloaded from Rajcomics store for rupees 36.