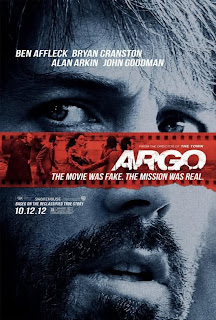 You’ll find a lot of great movies and shows on cable-tv.com, but right now, nothing can beat the biggest hit in theaters: Argo.

Ben Affleck directed and starred in this gem of a movie – Argo is Affleck’s third shot at directing, and hands down the best. “Based on true story” movies can be hit or miss, but Argo is one that shines.Argo is a hugely successful thriller based on the real-life 444-day long situation in Iran where 52 Americans were held hostage from 1979-1981. Argo focuses on the six Americans who escaped the Iranians and made their way to the Canadian embassy in Tehran.

Tony Mendez (Ben Affleck), a CIA extractor, hatches a plan to rescue these six – by pretending to be a Canadian film producer who is planning a sci-fi movie called Argo. Of course, there is no movie, but it has to look real for Mendez to succeed at rescuing the hostages, so he gets help from Lester Siegel (Alan Arkin) and John Chambers (John Goodman) back in Los Angeles.

Affleck takes us on a suspenseful, exciting journey based on the real Argo project. Of course, it has a bit of Hollywood added in, but the film gives a great portrayal of the real events.

Chris Terrio’s script is wonderfully written, with laughs at the right places and suspense throughout. It makes you nervous and tense, even knowing the outcome of the true events.

This one’s got Oscar written all over it, and Argo holds its own as one of the best movies of the year. With a movie like this in his portfolio, Ben Affleck is becoming one of the top directors of today. Affleck’s had successful movies in the past – and also some duds – but I’m sure I’m not the only one who can’t wait to see what he’ll direct for us next.