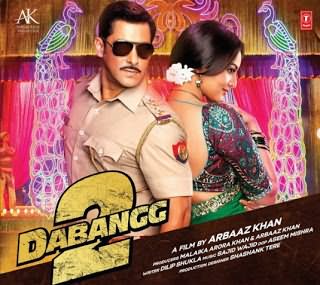 There were rumours right after the first Dabangg movie that the sequel may be seen soon. Now in December 2012, the much awaited sequel of Dabangg is out and is doing good business in the box office. Dabangg 2, has been directed by Salman Khan’s brother Arbaaz Khan. Like most of the other Salman Khan movies previously seen by you, this is also a good movie which you can watch along with your family. No wonder Salman Khan has been picky again with the launch dates, earlier it was Eid when “Ek Tha Tiger” was launched now its Christmas.

The movie has been mostly shot in cities of Uttar Pradesh. The story of the movie starts with Chulbul Pandey our cop and main hero of the movie also called Robinhood Pandey taking transfer from Lalganj to Kanpur so he can perform more heroic deeds. Once again the first scene shows Salman in action beating up bad guys in an avatar of Kung Fu Pandey.
The story revolves around Chulbul trying to eradicate, the criminal activities being spread by Bachcha Bhaiya (played by Prakash Raj) and his gang in town, you might take it in the same way as Chulbul was fighting Chedi Singh in the first movie.
Chulbul kills the younger brother of Bachcha Bhai who is named Genda, and who was trying to harm an innocent girl. This is the starting of the battle between Salman Khan and the villain. Though the storyline lacks substantial material to keep the viewers enthralled, its the acting of Salman Khan which keeps them glued to their seats. Sonakshi Sinha on the other hand is playing the role of Rajjo once again. Her acting has improved since last movie.

But much like the earlier movie there is a small role of Sonakshi here. There are a few romantic songs but none of them seem to be as good as in Dabangg part 1. Songs have been composed by Sajid Wajid, some of the songs include, “Pandey ji seeti”, “Dagahbaaz” etc. None of the other songs seem to make as much of an impact as the earlier movie. Probably the cast was in a hurry to make a sequel and little effort was made to select songs.

The action is once again awesome some of the scenes include death defying stunts, where Salman partially lifts a SUV.
Though the movie is doing good business some people may still fail in finding logic in it. Most of the review sites have given the movie 4 out of 5 stars.