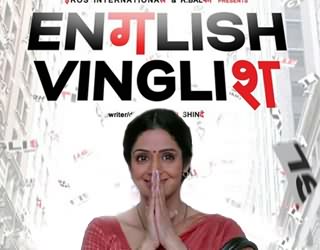 English Vinglish is a new movie starring Sridevi,it has been about 15 years since Sridevi last worked in movies. The movie is directed by Gauri Shinde, who has worked well to bring out the talents of Sridevi. The story of the movie is about a housewife, who is living with her family and does not know English. This is a big problem for Sashi (Sridevi), who is unable to connect with her family. She is living abroad with her family. Some of the popular scenes in the movie shown by Gauri Shinde are the visa interview which Sridevi has to take making it look a daunting task for simple housewife who doesn’t know English.
Most of the movie is shot in New York, as we see how Sridevi struggles to manage around people who know English and she is not able to have conversations with them or convey her ideas.
Later in the movie she is determined to learn English and prove the world that she is a much confident woman than before. The movie has some light comedy, touching, and emotional scenes as well. This is a family movie and can be watched along with your young ones as well. This can be said as the decent movie but is still struggling at the box office. It has been given a 8.6 rating at imdb but is filled with emotions and light comedy do not expect too much from it.