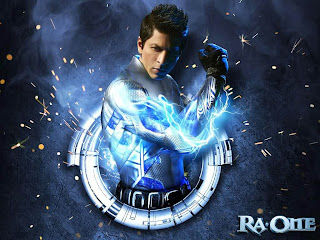 Before the review of Ra.One the first question that comes to everyone’s mind is was so much promotion necessary, was this overmarketing and under delivery, what people expected was a movie like Superman, Spiderman, Batman but what they saw was disappointment. I think the other bollywood heroic movies like Krishh were better because there was not so much hype on it. Mostly the story was concrete.

Shahrukh Khan’s Ra.One is a super hero movie named after the villain of the movie RA.One. The movie has received mixed reviews as till Friday, RA.One had collected over Rs 60 cr at the box office in India, the film’s spokesperson claims. “I feel relieved to see it open well. I’ve been travelling, so I wasn’t able to follow the figures much. All my partners now feel that they’ll be able to recover their money.”

The film, which also stars Arjun Rampal and Kareena Kapoor, was released on Diwali, October 26 and was made for a reported budget of Rs 150 crore. Ask him about the sequel, and he says he’s leaving it all to time: “Let’s see how it fares. It’s lot of hard work. I’m happy how people have responded, despite mixed reports. Once it has come to the fore, I’ll give it a thought.”

Khan will be seen in Farhan Akhtar’s next directorial Don 2 in December, and will start shooting for Yash Chopra’s film in January 2012.

The story of Ra.One revolves around Shahrukh Khan who is a father trying hard to ‘fit-in’ in his Son’s badass world- A son trying hard to ‘dude-up’ his dad from ‘aiiiyyyo’ to ‘YO!’ And a mother lost in translation between her husband’s ‘ingeva’ and her son’s ‘Inn’it!’

While Shekhar was trying every trick in the book to woo his son, get ‘dude-ified’ and ‘up his coolness quotient’ his son had given up on him. Just when the father-son duo hit a deadlock- Shekhar strikes gold when he makes an amazing real game.
One day the game turns to reality and characters start to become real. All hell breaks loose when – the game that was meant to be played with… starts playing them. Overall the movie received mixed and lower than expected reviews, I am not sure if people will like Ra.One after watching Batman or Spidy. Still a good attempt and worth watching for kids. Some say the movie is filled with lewd language. So even for kids the movie is a no no.