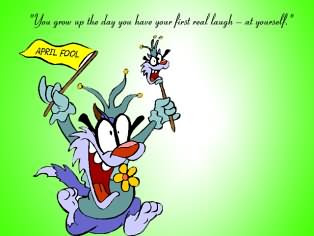 1st April is celebrated as April Fool’s day in various countries. At some places it is a national holiday. On this day we play pranks on our friends and pals. Here is a small collection April Fool’s day sms and April Fool Sms in English and Hindi.According to history of April Fools include the Roman festival of Hilaria, on March 25 was, and the Medieval Festival of Fools, December 28 was held one day left to make jokes Spanish-speaking countries.

In Chaucer’s Canterbury Tales (1392), “The history of religion as a priest,” the SYN March Bigan is thritty two dayes. Modern scholars believe that it is a mistake in the existing manuscripts and Chaucer actually wrote, Syn March was gon. Thus the passage originally 32 days in April, ie, 2 May, the anniversary of the participation of King Richard II of England to Anne of Bohemia, which was held in 1381 readers, the importance of this line “March 32″, ie , April 1 misunderstood. in Chaucer’s tale, the rooster Chauntecleer vain, is tricked by a fox.

I Have Changed My Number,

Note Down My New No.

And Plz Give Me A Miss Call.

3.A man can touch sun if his body is completely surrounded by mercury.

4.No twins have been born til now in Greenland.

6.All the details are False.

Thanks For Beleiving Me For A While.

Fool Day to the King of Fools..

f a baby is born in AFRICA,

What will be the colour of the babies teeth??

U r one of d CUTEST persons in this world!!

Just a second, don’t misunderstand me.

Which is the best day to propose a girl.. 1st April..

If she accepts den its your luck,