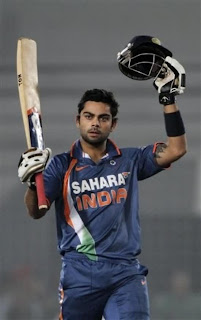 In an amazing high scoring match at the 2012 Asia cup both the teams India and Pakistan, scored more than 660 runs in total. India won the match against Pakistan which was played yesterday at Mirpur in the Shere Bangla National Stadium. Batting first by winning the toss, Pakistan decided to bat and thrashed the Indian bowling with both the opening batsman making more than 100 runs each. Hafeez who made 105 from 113 balls and Nasir Jamshed made 112 from 104 balls. Bowlers like Ashwin seemed ineffective and were thrashed. Praveen Kumar and I Pathan were expensive too give 77 and 69 runs respectively in their 10 overs. the final score was 329 by Pakistan in 50 overs.India had to make 330 runs to win. India stumbled with Gambhir getting out at duck. But Sachin started well with score of 52 runs he got out chipping on slip. Later Virat Kohli who played a great innings broke all records Virat scored 184 runs of just 148 balls making the highest score ever against Pakistan by an Indian. He was supported well by Rohit Sharma who played slow but made a decent 68 runs of 83 balls. Later Dhoni came in and hit a boundary to make the winning run. Here is the complete score of India’s win still we need to see if India can enter the finals.

Pakistan Won the Toss and Elected to bat

Man of the Match was given to :- Virat Kohli