Only few of us enjoy such freedom in today’s world who still dream to drive a toy car in public. Much like flying on a Harry Potter’s broom, something similar happened when Texas State student Tara Monroe drove a pink Barbie Jeep.

The Industrial engineering student said that her license was suspended when she refused to undergo the breathalyzer test after a concert. After which her father took away her vechile allowing her to drive around on a bike. 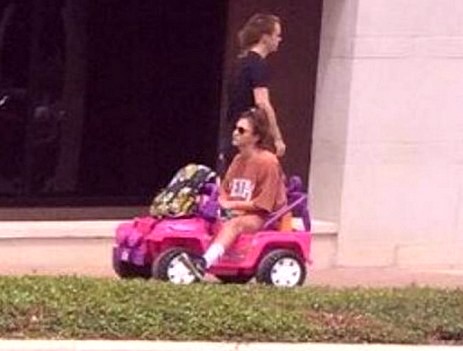 Since does not like bikes very much she decided to find herself something she could drive. She searched the internet and found a Barbie Jeep for 60 dollars over craigslist.org classified site, which was electric powered.
She then drove around the campus. The 20 year old is 5 feet 3 inches tall and managed to some how fit inside the small car. Everyone seemed to be amused by her act and burst into laughter after seeing drive a 12 volt battery car at 5 mph. She says this is this is fastest way to drive around and better than walking.

She told that, “It goes pretty fast when it’s just me, so I usually make them (her friends) walk behind me like parents taking their kid out to play,”. “I’m just happy everyone thinks this is so hilarious.”