Google is here with its own set of innovative solution to help with chronically deficient internet infrastructure which all the developing countries in the world, especially India are suffering from. It has come up with PROJECT LOON to partially, if not fully, alleviate this problem with the help of high altitude balloons.

Hundreds of net beaming balloonsdeveloped by Google X, Alphabet’s primary innovation division, would have the ability to rise global internet capability experienced like never before. Mr. Mike Cassidy, recently noted in a Google Press meet that about 1000 such balloons are already in operation, which had circled the world about 20 times and travelled upwards of 20 million kms. 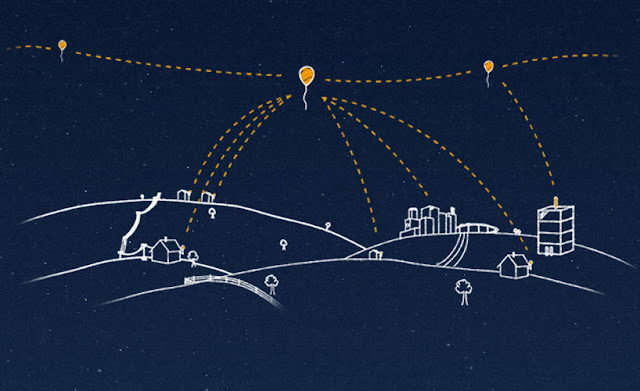 Flying at about 30 kms above the earth’s surface in the stratosphere layer, these high-altitude balloons create an ‘aerial wireless network’ by traversing through different layers of wind and changing directions in the desired direction with the help of software algorithms, and thus form one large telecommunication network.

The internet speed relayed may reachupto 3G,and in some places, 4G speeds. The project is primarily targeted to reach 5 billion people who are still unconnected to the mainstream internet. A special Internet antenna is used in each building which act as signal receivers, the balloon network relays the signal to a ground-based station connected to an Internet service provider (ISP), who then connects it onto the global Internet. This is the basic working model of Project Loon.

Made up of sheets of polyethylene plastic, these are some 50 feet wide and 40 feet tall when fully inflated. Powered by solar panels and wind, each balloon is designed to give ground connectivity to approximately 40 kilometres using LTE. It has plans to partner with telecommunication companies to share their cellular spectrum so that people may access internet through their LTE-enables mobile devices. Experimental projects in NewZealand and Brazil have been successful and received well by local population.

In a big news for India, Google has approached Indian government to deploy Project Loon for its population, so that internet access and affordability may be improved. It is slated to partner with telecom major BSNL for testing this technology by using broadband spectrum in 2.6GHz band. Interestingly, it has also approached Indonesia and has partnered with the country’s 3 major mobile network operators to expand Internet’s reach.

The Project Loon is being viewed as a game-changer by the Indian government as its major schemes like Digital India, Skill India and StartUp India bank heavily on the internet infrastructure and the way people stay connected to the virtual world is surely going to be a major source of development.