Tulsi Vivah is a ritual in Hinduism performed during Prabodhini Ekadashi – the eleventh lunar day of the bright fortnight of the Hindu month Karthik to the full moon of the month.

Story behind the Tulsi Vivah:

During ancient times, a demon by the name Jalandhar reigned through shock and terror, being very brave and powerful warrior. This strength was derived from his wife Tulsi’s (or Brinda) devotion and unflinching loyalty to him. Because of her effect, he was unconquered, even by Lord Shiva, the god of destroying evil. All gods approached Lord Vishnu, the lord who preserves the universe – and pleaded him to take urgent steps to deal with Jalandhar’s atrocities. Mahavishnu as a result decided to rob Tulsi of her chastity so that Jalandhar is rendered powerless. The same was done, and Jalandhar was killed as a result. 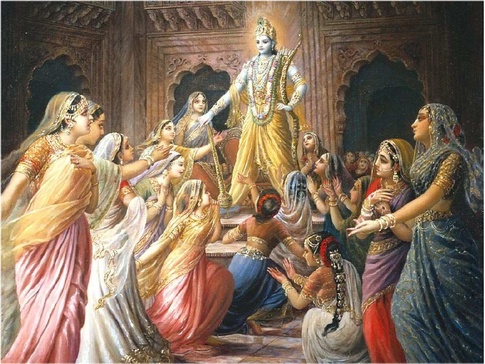 But when Tulsi got to know that she was deceived in doing away her chastity, she cursed Vishnu that he would also suffer separation from his wife as she’s suffering and his wife would be besieged by someone through deceit, same way as she was subjected to, and did sati soon afterwards. It is believed that Tulsi plant started to grow where she did sati. Because of this curse, Lord Vishnu incarnated as Rama avatar and had to lose Sitadevi to demon Ravana, and had to undergo hardship to get her back.

According to another version, Lord Vishnu was cursed by Tulsi to be casted as a stone, to which he replied that she would always be with him and those who perform Tulsi Vivah would be entitled to heaven. Thus Vishnu as Shaligram is prayed with Tulsi.

Legend has it that Lord Krishna was weighed in gold by Satyabhama, but couldn’t outweigh the lord even after using her entire gold wealth. But when Rukmini placed a Tulsi leaf, he was instantly outweighed, which showed his love for Tulsi.

Performed as a traditional Hindu marriage in homes and temples, the Tulsi mandap is decorated with sari as a bride; the groom is the black Shaligram (Vishnu) clothed in dhoti. These rituals are mentioned in Padma Purana in detail. Both Vishnu and Tulsi are bathed and decorated with flowers and then linked with a cotton thread. Mangal Ashtaka mantras chanted signifies completion of the marriage ceremony. It is normally performed by daughter-less couple, as it is considered desirous to do kanyadaan of daughter Tulsi to Vishnu to achieve moksha(salvation). 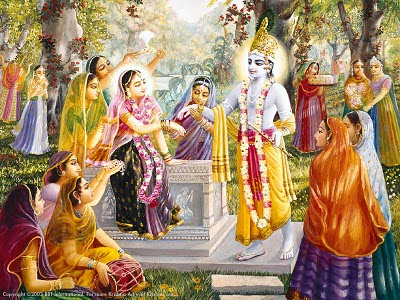 This festival, though observed all over Northern India has special significance in Gujarat and Maharashtra, where it is observed with gaiety and reverence. It also marks the beginning of holy wedding season of Hindus.

Let’s seek blessings from Lord Vishnu through observing this auspicious occasion of Tulsi Vivah for a happy and prosperous life!!