Absolute Joker and Absolute Luthor are a collect of a box set which has 2 volumes or two comics in total. Most of the websites fail to mention this so when you goto a shop like me and buy a single comic book don’t be fooled.

The box set has 2 books one is Absolute Luthor and one is Absolute Joker. The Brian Azzarello’s tells the of story of Joker as he has has released from Arkham Asylum and he is annoyed all his money and property has been sold.

He found Jonny frost a thug at the Asylum and starts using him as his right hand. They two leave to Killer Croc’s lair where the three join hands and go the “Grin and Bare It” bar which was owned by Joker earlier and now has a new owner. The three along with Harley Quinn, they kill the new owner and take over the bar. Where they ask the audience to join them to take over the city. Next morning they rob a bank and Joker coaxes Penguin to invest the stolen money. There after Joker starts killing everyone who stole his money.
Next Penguin tells Joker that Harvey Dent the villan also known as Two Face, is not talking with him, Joker loses his temper and set the bar he acquired on fire. 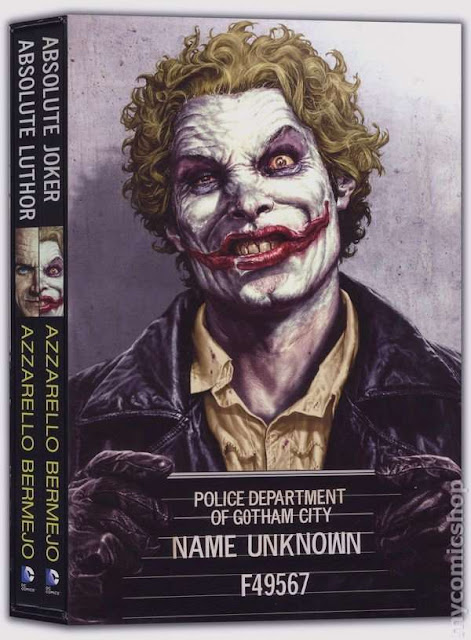 You can see in the above pic that there are two books in the box set, these two volumes make the absolute edition.

Two Face holds Jonny Frost who then warns Two face that the Joker will kill him. Due to this Frost is late the meeting with Riddler. The deal with Riddler is done but on the way back Joker’s men are attacked by cops hired by Dent or Two Face, but Frost saves Joker’s life.
Dent asks Joker to bring the Briefcase he has received from Riddler to him, but Joker says that he will reveal that he has two wives. The two indulge in a fight where Joker helps Jonny get his ex-wife back. But Joker abuses her and says they are now even because Frost had betrayed him by meeting Dent earlier.
Harvey Dent aka the Two Face begs the batman to help him take down the Joker. Who then brings Joker, Frost and the Killer Croc down.
You need to read the book to get in touch with the insides in detail. 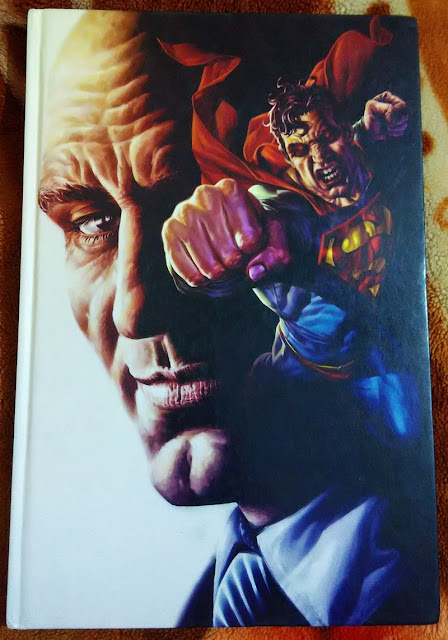 The story is narrated by Luthor himself, where he says that he is better than other killer or a villain. Where he shows his benovalance towards his loyal employees. He watches the video of Superman bringing down criminals and thinks why people are putting so much trust in an alien just because he looks like a human. On the other hand Lex’s accomplice frees a Russian scientist who is to abet Lex Luthor in an upcoming project. Mr. Elias Orr the operative of Lex is threatening the employees that they should listen to Lex and comply with him rather than demanding high wages. 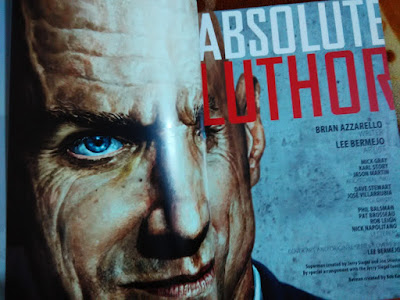 Lex Luthor visits Gotham city in the meanwhile and gives Bruce Wayne kryptonite as a gift and asks him if we can trust Superman. While Bruce Wayne dressed as Batman was looking at the kryptonite sitting on top of a gorgoyel he see that kyrptonite falls from his hand, this happened because Superman’s breath blew it away. The two have a one sided fight where Superman break’s Batman’s nose. Back at the wayne Mansion, Bruce calls Lex and agrees to his proposal after this attack by Superman.

At the Science Spire, Lex announces the arrival of new superhero which he has taken from Wayne’s medical research and the result of his scientists work. Hope Taya is a female with super strength and capabilities similar to Superman. She now becomes a corporate sponsored super hero.

On the other hand after a few successes, Orr approaches Toyman (Winslow Schott) with Lex’s offer. While Hope and Lex are in bed together when the news shows up saying that Schott the Toyman is wanted for bombing the Daycare Center where several people including the Russian scientist and his family are dead. Lex asks Hope to bring down the criminals. Hope flies and grabs Toyman who was being interrogated by Superman, and takes him in the sky. While Lex who was watching all this on screen pushpes some buttons causing Toyman to drop from her hands, Superman meanwhile catches him.
Superman confronts Hope that she was trying to kill Toyman, Hope attacks Superman and flies away to Science Spire where Hope is detonated by Lex and people think that Superman was the killer of this superhero. Superman goes to Lex’s office where Lex reveals how he had set up the plot where Superman was shown as saving Toyman the criminal and the reason for the death of Hope and even if there was one man who thought Superman was not the right person Lex had won and now Superman should leave his place. The story ends there.
You need to run your brain twice in this comics as Lex is one mastermind, probably even better than Joker as he has his knowledge of science behind him. The drawings of this book are very realistic and much like paintings with no outlines.