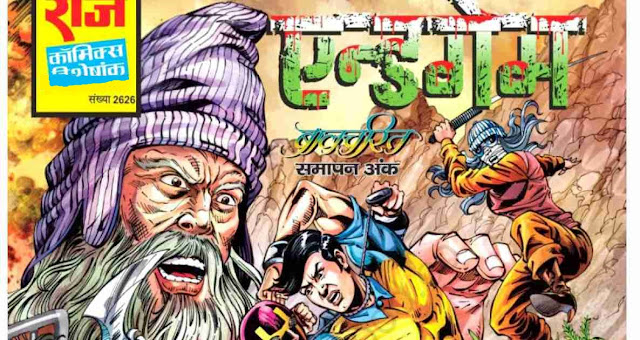 Super Commando Dhruv’s latest comics is End game. It is the last part of the Bal Charit series. डेड एन्ड सुपर कमांडो ध्रुव कॉमिक्स बल चरित समापन अंक डाउनलोड करें. In this comics series Dhruv has to fight a dangerous group called hunters. Which has separated his family and every one close to him, including his mother and father Rajan who is a police commissioner. This story also brings back the story of Dhruv when he was a child and was brought up in jupiter circus.

In the comics “Flashback”, we come to know more about his mischievous attitude. The Bal Charit comics series also brings back his mother Radha. The story of end game starring Dhruv is very complex if you want to enjoy it the best would be to download or buy it from Rajcomics online store www.rajcomics.com

Endgame is a super digest or visheshank comics with 155 pages. The story of the comics starts with Dhruv’s mother Radha fighting against a plant like creature and trying to save mathesh. But Radha and Matthesh easily defeat him, seeing a sure defeat the creature decides to flee. Matthesh then goes back to the trapped person named Mover, who had attacked the hunters hideout. Vakr interrogates Mover but he refuses to answer any of his questions about Radha or the leave covered creature. Matthesh and Vakra go back to Jacob.

On the other hand Dhruv is fighting a 4 handed two headed Torimori siamese twins.
The two give him a hard time, but Dhruv goes in the AC duct and throws the ceiling fan on their heads. But they still manage to keep fighting. Dhruv then tries to save the camera which has some proof against the hunters. He gives it to the bank manager and asks him to put it back in the locker. Meanwhile Chandika, who is originally Shweta in disguise shows up to help Dhruv. The two manage to lock the two headed Torimori Siamese twins inside the bank locker, while Dhruv goes on to check the contents of the camera.

Dhruv does not find any film role inside the camera and dejected by the results sits in the broken commando headquaters. This is when Chandika shows up again and tells him to come to Shweta’s secret lab which can help him decode the mystery of the camera.

They two are on Shweta’s scooty when Dhruv decides to meet up with his adopted mother Rajni and father Commissioner Rajan at the hospital which is on the way.

The misconceptions between his parents are cleared up and Dhruv then leaves for Shweta’s secret lab, where he investigates the camera under a infrared spectrometer machine. The two (Chandika and Dhruv) find out that there is a secret message written on dots inside the camera body. But as soon as they start analysing the data an invisible personality starts breaking up the camera. 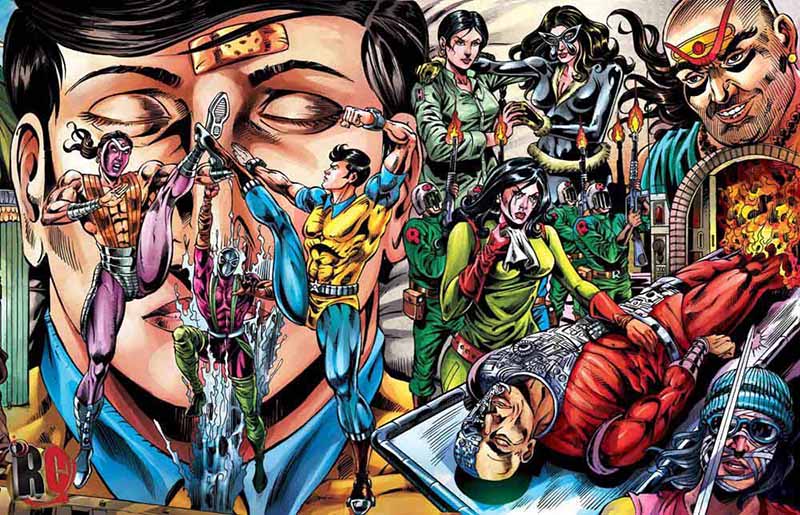 Dhruv and Chandika lock the room and spray it with gas and then water to find out the person who is behind this mischief. Dhruv attacks the guy but he is a bit fast they then throw paper rolls on him which makes the invisible man clearly visible for them the attack.

The person turns out to be baba ji who is trying to save their parents from the hunters.
Baba ji then takes Dhruv and Chandika to the hunters hideout to save Black Cat who is already there. Black cat is following Radha, who goes into a secret house and takes off her disguise but then Black cat looses conciousness and wakes up infront of the leaf creature who has tied her up.

The leaf guy then tells Black cat that her blood contains the part of the secret serum formula which he is after and he is extracting some of the blood from her body.

The scene is then opens up in a helicopter where Natasha and Twisty are heading towards Black cat’s last location. On the other hand Dhruv is with Baba ji who tells him the story of the origin of Hunters. They were a secret group formed during 1910 when the Britishers were slaying various Matts or monasteries.

Then Matthadheesh Mahabal searched various fighters from across India and made a group to fight against the British. Britishers were so scared of the hunters that they stopped entering their area.

As the story was being narrated a bird comes up near the car and tells Dhruv that the members of his commando force are alive and trapped in the hunters headquarters.

The story continues where Baba ji tells that Vajradhar was given the charge of the hunters who finds a hakeem or a doctor named Kimiadas in Kashiraj who creates a medicine giving amazing powers to the hunters.

Earlier the hunters used to fight for the Indian government and secret agencies but later Vajra found out that the hunters are being used for personal works by Dadwal.

Rest of the story is a bit complicated and can be best understood when you read the comics. Matthadheesh’s daughter named Guarangi was sent on a mission when she finds the truth about Dadwal, the secret agent of Indian Government who gives work to the hunters.

She finds out that Dadwal is betraying his country. She brings in the proof but no one belives her and as a punishment she is given a brain washing medicine and expelled from the group. Dada ji or the invisible then reveals that he is Vajradhar, father of Gaurangi who after being brain washed Gaurangi had joined Jupiter circus as Radha and Dada ji is the grand father of Dhruv.

Meanwhile, Natasha orders her Robo army to jump on the hunters headquaters in the jungle, but the clouds over the headquaters are acid ridden melting all the soldiers of the Grand Master’s Robo army. Fortunately Natasha survives as her plane crashes in the jungle.

Dhruv and the others fight there way to find Martand current leader of hunters, the person who is the father of Vakra and who tried to kill Dada ji (Vajradhar). The have a heated battle but as usual our super hero Dhruv finds a way and defeats him.

But the tables turn around when Martand’s son Vakra shows up with the prisons Chandika and Jacob. Forcing Dhruv to back out and fight Vakra in a ring one on one.
Vakra loses the fight when Matthesh comes with a sword and throws at Dhruv, he is saved by Radha who comes in between the sword and dhruv, she is knocked out cold. People remove the bandages on her face to find out that it is Matthesh’ wife who is dressed as her identical twin sister Radha. She(Kalika) tells that Dhruv is her son and she had exchanged it with Radha’s son who is Vakra.

But uncle Jacob tells that during the birth he had suspected that the nurse had changed the kids, so he again changed the towel in which the kids were wrapped and so it is actually Vakra who is Kalika’s son and not Dhruv. I wonder why this kid exchange business took place if both the kids were born at the same time.

Kalika wanted her son to be the new leader of the monestary. So she had undergone a surgery to give birth. While Martand the leader of the monestary or Matthesh is annoyed with his wife Kalika, tables turn.
The guy in leaf turns up with his two associates Mover and Hakim, the one who makes medicines for the hunters. The guy in leaf is actually Grand Master Robo, and the other guy Mover is his son.

Vakra, attacks Mover but is thrown back by a solid kick, next Martand throws his axe at Mover, who is breaks the axe in several pieces and throws back at Martand piercing his body and badly injuring him. It’s now Dhruv’s turn to fight Mover and he removes Mover’s mask revealing his true identity as Natasha’s brother Product, and the leaf guy as Grand Master Robo who is still alive. Robo was here to get the secret medicine which can revive his ailing body.

Now that Robo has the medicine he is claiming to become the leader of the Hunters, he orders Mover or Product Robo to beat Dhruv. Dhruv is having a hard time fighting Product but Nana ji or original Matthadheesh Mahabal comes to save Dhruv, with his powers of invisibility.

Dhruv then talks to his grand father and gets the secret of the memory loss medicine. He gives his medicine in the form of fumes to Product and Grand Master Robo amazingly no one else gets affected by the medicine. Not even Dhruv who is in close proximity of the fumes.
Grand Master Robo vanishes along with Product, on knowing the truth and begins to lose his memory.
As every in every hindi movie the police arrives at the end, Commissioner Rajan or Dhruv’s father arrives, telling him that Shweta(dressed as Chandika) had a GPS tracker chip which allowed him to reach this place.
Everyone is caught by the police, Dhruv assures Martand and Vakra that he will take care of the villagers and ensure that Hunters are on the right path in their lives.
Dhruv also gives some responsibilities to Vakra’s sister Twisty.
Before leaving with the police Martand tells Dhruv about the temple of Goddess Durga where his mother used to train, it contains hidden secrets and the inner sanctum doors should never be opened.
Dhruv promises to keep the temple safe and the story ends with mysteries.
If you like the story do leave your comments. The story feels like it is being stretched at times and people are changing faces and identities for no reason.

Still over all a good comics to read, it did complicate the origin of our hero Super Commando Dhruv but in the end nothing seems to have changed much. Dhruv is still the son of Radha who was once a hunter and her real name was Gaurangi.

The art work and story by Anupam Sinha is once again amazing and keeps the users engaged. To keep the comics industry alive visit Rajcomics.com here ==> https://www.rajcomics.com/index.php/12657/10515/set-04-of-2018/END-GAME-12657-detail

and buy this series now or you can try the book stalls near you or at any railway station. If you want to download End Game Dhruv comics you should try the Raj comics Android app.