Injustice Gods Among Us is based on the popular video game which aimed to show the clash of the powerful super heroes from the DC Universe, what will happen when Batman, Superman, Green Lantern and everyone else starts to fight among each other and that in Mortal Kombat style. The comics follows the story line of the video game. The graphic novel of Injustice Gods Among Us Volume 1 collects issue 1-6 and was released on Nov 13 2013. What happens when the god of strength the Superman gets angry. You have seen him destroy planets in some comics now see how he will even fight the Gods like Zeus in Injustice. 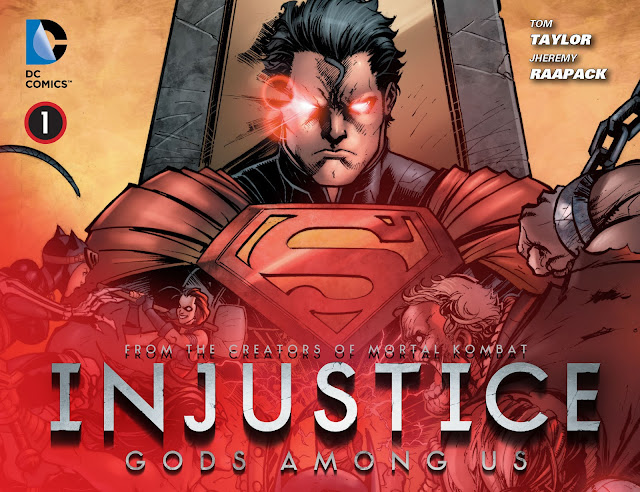 The story of Injustice begins on a rooftop, with two of the best known superheroes of our time and great friends – Superman and Batman –sitting; Superman looks at Batman and asks him to be the godfather; Bruce looks surprised, and Clark smiles and comments– ‘Hey look! The world’s greatest detective is surprised!’ 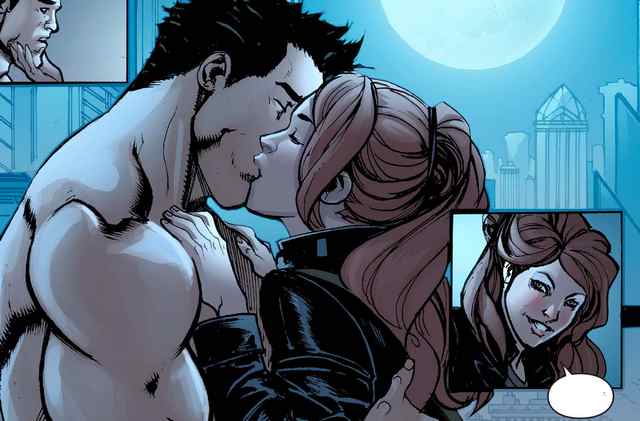 Superman comes to know about their baby

Superman is married to Lois Lane, Gotham city is relatively calm and superheroes are revered among the people. This is a perfect world that the Joker has pledged to ruin as he shoots and kills Jimmy Elson and kidnaps Lois Lane. Superman unfortunately can’t find her, and asks Batman to help him do that! Understanding the gravity of the situation, Batman calls up the entire Justice League, “We need everyone to look out for Lois Lane.. This is an important bulletin!” Flash arrives immediately in Metropolis, and Batman looks for Lois but in vain – he can’t find her.

He carries Batman to S.T.A.R. Labs where the Scarecrow is found dead from Joker’s toxin; The Wonder woman then calls up Batman to let him know that they have got a lead – the Joker is in a submarine beneath the metropolis. Superman flies over the bay and finds the submarine and tears it open with his bare hands. Inside, he finds Lois being operated upon by Joker and Harley Quinn, but before Superman attacks them, Joker hits Superman with the fear toxin. Superman is confronted by Doomsday, and Superman, having no time to fight with Doomsday, grabs and throws him up into space! Seeing all this, both Joker and Harley leave the submarine, with Quinn cheerfully saying goodbye to the submarine, “Goodbye Gunther”.

Batman, on arriving on submarine asks Joker that what he did, and Joker in his characteristic way replies – “I have put a warhead in metropolis, and wired the detonator to Lane’s heartbeat! Once her heartbeat stops, the bomb will go off!”A question arises in Batman’s mind– why would her heart stop?? He joins everything together – the fear toxin stolen from Scarecrow was laced with Kryptonite from S.T.A.R. labs, so that it gets into superman’s bloodstream. He yells to Superman to stop doing what he’s seeing, as that’s not real! Superman, after the gas wears off,realises what he has done –he looks in horror with tears welling up in his eyes – reveals Lois with their unborn child is drifting off into space as he had thrown her thinking as Doomsday. The nuclear warhead detonates in Metropolis due to her death. The Justice League goes on a spree to save as many people as they can from this fallout. Meanwhile, Batman takes Joker to Gotham prison. 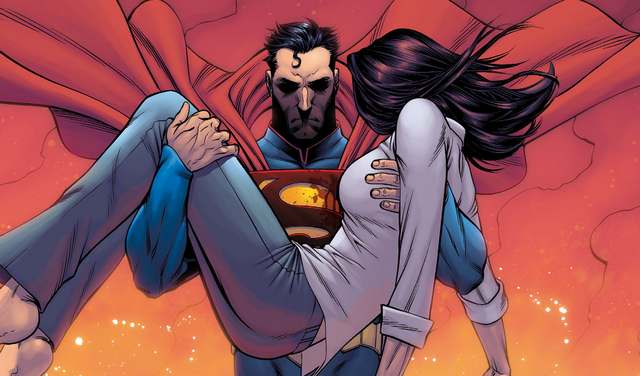 Superman is overcome with grief and can’t believe what he has been forced to do and hold Loin’s dead body together, and hands it over to Wonder Woman and asks her to keep it safe. He then takes off at top speed, amidst Wonder woman’s questioning where he is going. Green Lantern gets in his path, Superman questions about Joker, to which he replies that Batman has taken him to Gotham prison. The Green Lantern is unable to stop the indestructible force of Superman even with his ring. In Gotham, Batman is interrogating Joker when suddenly the wall is torn out, Superman come in and ruptures the chest of Joker with his hands in a fit of rage, leaving Batman visibly shocked! 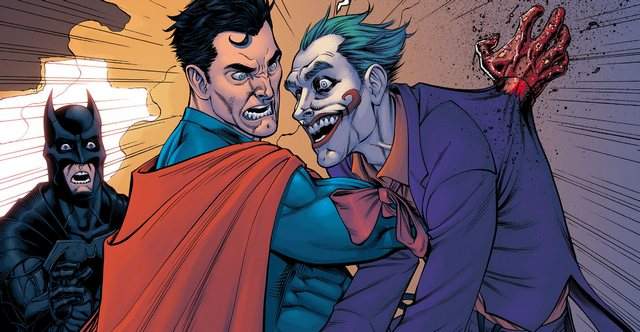 Superman does what Batman could never do erase the weakness

Superman then retreats to Fortress of Solitude where he grieves to the best of his abilities. But he can’t do it and is disturbed by disastrous events taking place around him. “No more”! He pledges to himself and takes off on a mission, there is a war taking place in the Middle East that he thinks should not happen, and he tells the people that he is going to stop the incoming rockets and stop casualties from happening. 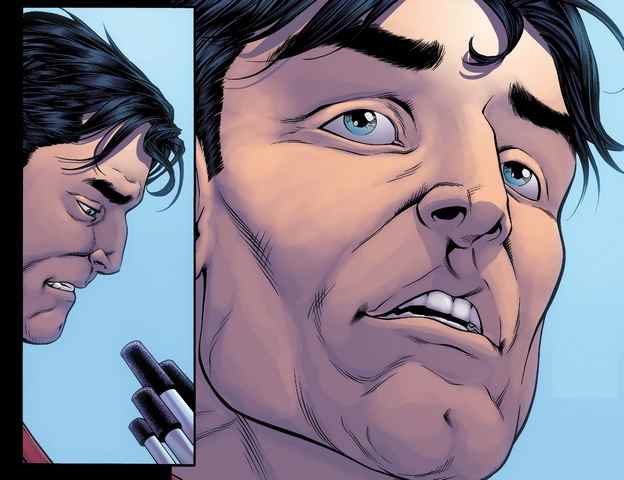 Superman reveals his identity at the UN

He walks into the Presidential palace, grabs the president by his shirt and takes him to the people that he has been killing. He strips him down to underwear. Wonder-woman lands and sees what he is doing and warns him that there are cameras watching his action. She asks him not to do anything here and calls for a press conference to bare it all for UN. With Wonder Woman behind him, Superman reveals that his name is Clark Kent and he was a reporter for the Daily Planet, and that he is tired of all this fighting. He warns the President that has no right in taking innocent lives and called for a worldwide ceasefire, and warned that if anybody doesn’t obey it, he will stop them and declared emphatically – “It’s over!!”

Superman destroys missiles that was launched at Gerad to enforce his ceasefire. US government makes its biggest mistake in history by kidnapping Clark Kant’s parents – Jonathan and Martha – through a team of mercenaries led by Mirror Master and keep them in his Mirror dimension and subsequently burn down their home in Smallville. Superman arrives to find his burning home and calling out for his parents, and gets a warning from Mirror Master – “stop what you are doing, or else we will kill your parents. I have kept them in a place where even you can’t find them”.

Will Superman meet his family

Meanwhile, most of the Justice League gather at Watchtower to discuss past week’s happenings, with Wonder Woman agreeing that all have been affected by last week’s tragedy, but giving out the hope that Superman is trying to make the world a better place. She asks for help from them to help finding Superman’s kidnapped parents, and asks then to stand with her, as she as Princess Diana is always ready. The Justice League thinks about it and Cyborg steps forward, with a belief that Superman will save this world 10 times over and I will stand with you!

Will the Justice League members ultimately find Superman’s parents?? Where has Batman all been till now? What are the plans of Harley Quinn??

All images are copyright to DC Comics you can buy the comics in paperback, hardcover or pdf format from your local store, Amazon online store and support the comics industry http://www.dccomics.com/graphic-novels/injustice-gods-among-us-vol-1