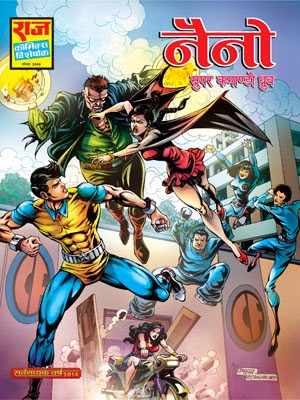 Super Commando Dhruv’s new comics is Nano priced at Rs 50 this is a 48 pages comics. The story is about a creature who has powers made of nano machines. Much like the GI Joe where nano creatures try to take over the world. Even the Super Commando Dhruv’s very own Commando force becomes evil along with Shweta, the sister of Dhruv. The drawing is pretty good and has been done by Anupam Sinha ji. So you will get the glimpse of the same old hair style and physique that Dhruv used to carry in his early comics. Dhruv is one of the popular Indian super hero who has no special magical or super human powers. He just uses his brain to defeat his enemies.

Some of the most powerful enemies he has defeated till date include, Chumba who is a super villain with magnetic powers, Chandkaal, a super villain with magical powers, Mahamanav, a villain who has mental powers much bigger than any other super villain of Dhruv. Being young, agile and one step ahead of his enemies Dhruv has always been successful in maintaining peace in his city of Raj Nagar. His father is a police commissioner and sister Shweta disguises a hero named Chandika fighting crime. This is a must read comics for all Dhruv fans.

Dhruv is one of the popular Indian super hero who has no special magical or super human powers. He just uses his brain to defeat his enemies. According to the description of the comics Nano #2250 has obtained a super power and is on a mission to destroy Raj Nagar and the entire planet. Super Commando Dhruv and his commando force get into trouble when they try to stop him.

Share your reviews and the story of the comics.