No Mans Land is the latest comics from Super Commando Dhruv’s Balchartira series written and drawn by Anupam Sinha ji. He has been the artist for Dhruv comics since its evolution way back in the early 80’s and 90’s the first comics being Pratishodh ki Jwala where Dhruv is shown to have been born in Jupiter circus which catches fire and he is as a young child becomes orphan, but he is found by Commissioner Rajan Verma who takes him as his son and his wife loves Dhruv as his own son, they both have taken care of Dhruv since that day and he has always treated their daughter Shweta as his own sister who is plays the role of Chandika. The reason why I am telling you this is because the No Man’s Land comics will take you back to the origin story of Dhruv. 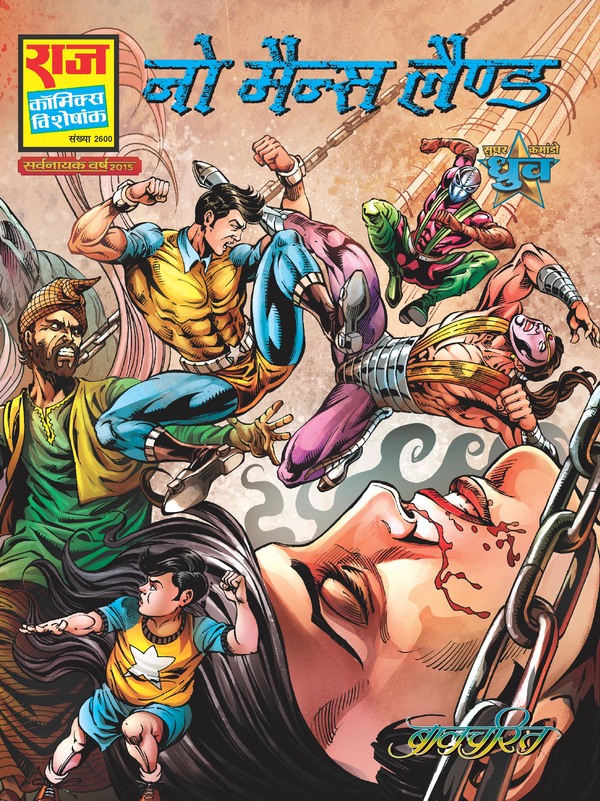 As you have read earlier(Hunters comic) Uncle Jacob who had some of the remains of Jupiter Circus where Dhruv was born has been missing for sometime now, he was captured by some bad guys and they have been interrogating him to reveal the address of the container which has the belongings from the circus their motives has not been clear till this comics. Meanwhile Dhruv’s real mother Radha has emerged from the hiding and is also busy fighting bad guys while she manages to save Jacob with the help of his pet gorilla, she is wounded in this act and lands in the hospital where Dhruv and his Rajan’s family find out that Dhruv’s mother is alive. You can read all this in the previous issues starting with Hunters, and Flashback.

The story of No Man’s Land starts with Commando force fighting with a warrior named Vakra who belongs to a secret group and has been assigned the task of taking over the container which has landed in India.
Meanwhile Dhruv is on his way to fight this bad guy who is too much for 3 fighters of the commando force. Meanwhile Dhruv comes in finds out that his force has been defeated on the other hand Grand Master Robo has taken his last breath where Natasha is looking after her. This part of the story was hard to understand as these days the storyline box has been removed from the Raj comics making it super hard to get the storyline. Also the annoying part is that story goes to and fro from one fight to another.

While Dhruv is fighting with Vakra he is hypnotised and lost in the dreams of his past. Vakra gains upper hand and brings down Dhruv, as he falls unconscious and Vakra was about to finish him a guy named Mover comes into the story. He takes away Dhruv from the fight scene and leaves him in the hospital.

The next few pages of the story is where Dhruv is dreaming about his evolution days in the circus how his mother, father and friends were fighting the bad guys before he was about to enter this world. Vakra on the other hand who was unable to kill Dhruv has managed to capture the three commandos of the Commando force and intends to get answers to his questions. His mother does not like this but still has to live with it. We have to read the next comics named Phoenix to find out more about this story.
For downloading and reading No Man’s Land in pdf format you can goto Raj comics store and buy it.

Neeshu.com will be giving away free copy of No Man’s Land to first 5 users who leave a comment below. Make sure you enter your correct email address so we can get in touch with you.