A typical Sanjay Leela Bhansali film – with the usual grandeur and scaled up affair with all glittering personification of protagonists being the centre theme.Set in a Maratha court, Peshwa Bajirao (Ranveer Singh) is depicted in the full glory of manhood of a great knight, his machismo and grace in full evidenceand sets off to expand his territory to new areas.Priyanka Chopra plays Kashibai, Bajirao’s wife and Deepika Padukone plays Mastani (lover / second wife), a fiery warrior princess.

There are magnanimous sets featuring great battle scenes and larger than life palaces. But in all the finer details showing glassed ceilings and extravagance, the story has been given a huge miss.While a disclaimer at the start of the movie puts an end to all the criticisms that may be leveraged against it for inaccurate interpretations of historical characters,but still there are some mumblings regarding Dilli darbar and grand-plan for ‘Hindustan’; The film starts with a narration from Irrfan Khan setting up characters, Mughal invaders are shown up with their armies, but these go off as stray mentions whereas the actual action takes place elsewhere: in the bedrooms and hallways between Bajirao and Mastani, with Kashibai valiantly fighting a rear-guard action.

Acting from Ranveer has been appreciated for his strong Marathi accent imposed character and owns the film. The sequence where Kashibai and Tanvi Azmi, playing Bajirao’s widowed, ambitious mother discusses the topics of love and betrayal demand special mention here and is one of outstanding scenes in the movie. 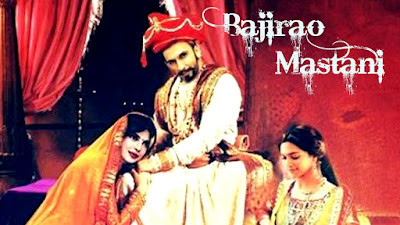 Ranveer – Deepika chemistry also will prove as a crowd-puller, and has moulded well with an action historical period drama. Pinga number, as expected stood out with Deepika and Priyanka adding the required zing, to an otherwise long and sometimes monotonous scene in the movie. The spectacle in the movie was provided a fillip with this song. But still the movie can be called a spectacle missing a strong gripping story, which can keep the audience rooted to the edge of their seats.

The grandiose nature of sets and drama, after all wears off after first half and you get bored. Actors play their part well, but the story could have been more compelling for making the point that historical dramas usually make. The couplets rendered with utmost preciseness and brevity are standouts, the movie finally stands up with performance of Kashibai, who personifies dignity and selflessness. A confrontation between the two leading ladies and the indications of who gets better of whom could have been a better fit for this otherwise spectacle movie.